Extreme Athletes in the X Games 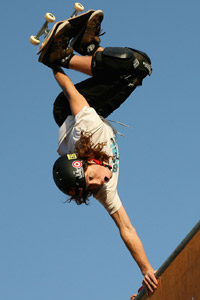 Just who are the athletes who make the X Games' crowds gasp? Here are a few of the competitors who have established themselves as extreme sports legends over the years:

Shaun Palmer: This Kirkwood, Calif., native once said "I am the king!" [source: Snowboarder Magazine]. When it comes to snowboarding, he's right. By 2008, he had already competed in 10 X Games, and at 38, he was still dominating on the slopes. Palmer is tied for the most number of gold medals in Winter X Games history.

Shaun White: The carrot-topped athlete is a leader in not one, but two extreme sports -- skateboarding and snowboarding. In 2003, he became the first person ever to compete in both the Summer and Winter X Games in two different sports. In his 2008 gold medal run, he completed the first 1,260-degree (three-and-a-half rotation) spin in X Game history.

Andy Macdonald: Better known as "Andy Mac," this skateboarding legend has been competing in the X Games since it began, and he's earned more medals -- 17 (six of them gold) -- than anyone else in the games. Macdonald also has the distinction of being the only person ever to have skated inside the White House [source: Andy Macdonald.com].

Terje Haakonsen: He's considered by some to be the greatest snowboarder in the history of the sport. Even though he doesn't compete much anymore, Haakonsen is still a legend.

Mike Metzger: Called the "Godfather" of freestyle motocross for the many innovations he introduced to the sport, Mike Metzger is probably best known for becoming the first rider to perform two backflips on a full-sized bike.

Tony Hawk: Even people who know nothing about skateboarding have heard of Tony Hawk. His name and face have graced everything from video games to an ESPN event (Tony Hawk's Gigantic Skatepark Tour). In 1999, he nailed the first ever 900 (two-and-a-half spins in midair) at the Summer X Games in San Francisco.

Fabiola Da Silva: Competing in an event dominated by men isn't easy, but Brazilian Fabiola Da Silva can hold her own among the boys. She's won eight inline skating medals (seven of them gold) at the X Games, and she was the first woman to execute a backflip in competition.

To learn more about the X Games and sports, look over the links below.