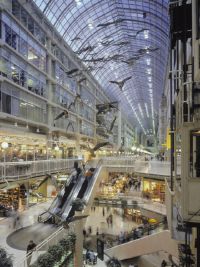 ©2006 Tourism Toronto Eaton Centre, built in 1979, is Toronto's top tourism attraction. This downtown mall has more than 285 shops and restaurants.

Toronto's neighborhoods have vibrant main streets filled with interesting shops with unique merchandise. But one mall -- the Eaton Centre -- bears mentioning, as it's ranked as Toronto's top tourism attraction, according to city records. When it was built in 1979, the Eaton Centre was an anomaly in Canada: a downtown mall that improved upon the suburban model. You can see the antecedents -- the natural light, the trees, and fountains -- which we now take for granted.

There are more than 285 shops, restaurants, and services to wind your way through, not to mention a movie theater, a ticket kiosk for same-day, discount theatre tickets, and a police station. Stop in for last-minute souvenir purchases at the Yes Toronto! Shop, where discerning tourists can find highly wearable T-shirts.

Insider's Guide: The Best of Shopping in Toronto

Hazelton Lanes (87 Ave) is home to dozens of exclusive shops, Toronto's only Roll Royce dealership, and a Whole Foods Market that has gourmet take-out and a small cafe.

Spend a lazy morning at the St. Lawrence Market (92 Front St East), where food lovers browse the 19th century stalls for homemade breads, mustards, spreads, fancy cheeses, spices, seafood, and prime cuts of meat. Pick up a snack or lunch before heading over to the Distillery District (55 Mill St), where funky shops and galleries inhabit old brick buildings once used for whiskey making.

Check out the Dragon City Shopping Mall (280 Spadina Ave, 416-596-8885), which has more than 30 stores and services that will allow you to immerse yourself in the Chinese culture. You can buy Chinese herbs or jewelry or admire arts and crafts.

There is enough to keep you browsing for days here, but two shops feature great souvenirs. If you're a fan of contemporary jewelry, you're sure to find something at Corktown Designs (55 Mill St, Bldg 54), which represents more than 50 Canadian and international jewelry makers. Pop into Soma Chocolatemaker (55 Mill St, Bldg 48) for a decadent treat. They specialize in artisan-quality chocolates, cookies, and candies made from estate and heirloom cacao beans and boast flavors you'll find nowhere else.

When you've finished shopping, perhaps you'll want to hit the town. Toronto's Entertainment District is teeming with clubs, theaters, and pubs, belying the city's former reputation as a place without much of a nightlife. Keep reading to learn more about nightlife and entertainment in Toronto.