The World's Most Beautiful Skylines

Can the ultra-modern skyscrapers, congested roadways and bright lights characteristic of today's concrete jungles be attractive? Absolutely! See some of the most beautiful skylines the modern world has to offer. 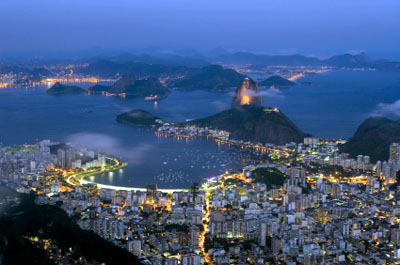 Hop on for a tour of the world's most beautiful cities. This aerial view shows the vibrant Rio de Janeiro, which hugs the coast of Brazil. There's one more stop in South America, and then it's off to the skyscraping cityscapes of Asia. 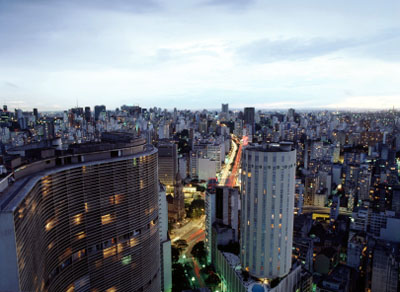 Sao Paulo, Brazil is one of the largest cities in the world. The city has more than 22 million people in the metropolitan area, with 11 million in the city itself. The next few cities of Asia combine the density of Sao Paulo with some of the boldest architecture on the planet. 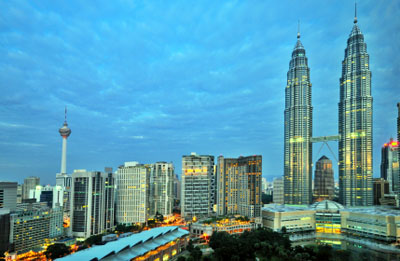 Kuala Lumpur in Malaysia is home to the Petronas Twin Towers, which stretch 1,482 feet (451.7 meters) from the ground to the top of their spires. Just a couple hundred miles away is the city-state of Singapore. 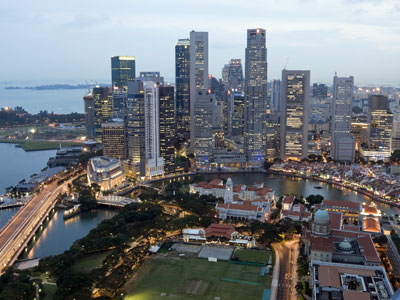 Singapore is a model of urban planning. Although high-rises in Singapore are limited to 918 feet (280 meters) for air traffic safety, the cityscape is still among the best. The next stop is in China. 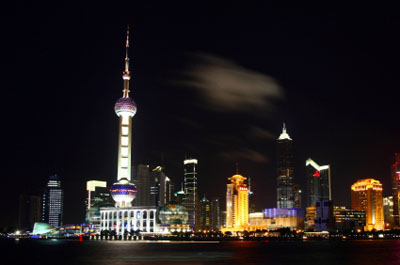 The Oriental Pearl Tower, at 1535 feet (468 meters) tall, is one of the highlights in Shanghai, China. Shanghai is one of the biggest financial and commercial centers in the world, but the next city matches both its economic and skyscraping prowess. 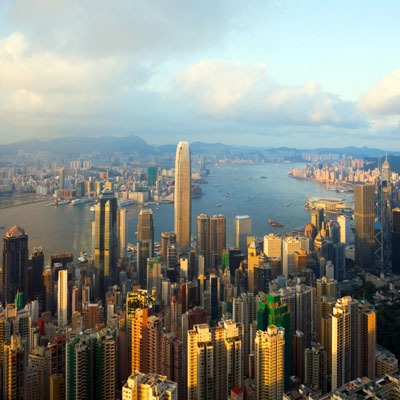 Hong Kong, seen here from nearby Victoria Peak, may be the most spectacular skyline on the planet. It has dozens of buildings more than 200 meters (656 feet) tall. Even though many of Hong Kong's skyscrapers were built within the last decade, Dubai is the real new kid on the block. 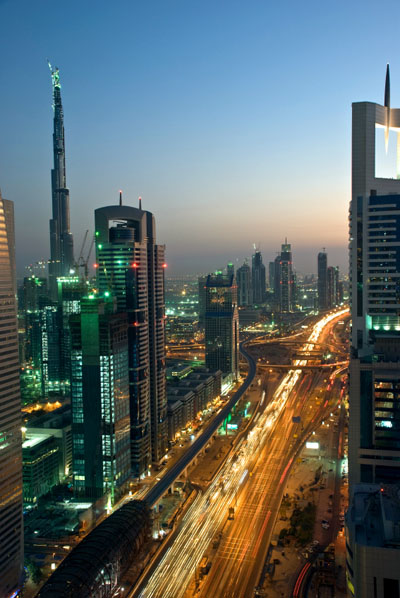 The heart of Dubai. On the left you can see the world's tallest building, the Burj, stretching 2,684 feet (818 meters) over the surrounding desert. Another spectacle under construction is the Dynamic Tower, which is to have 80 floors that can rotate independently of each other. 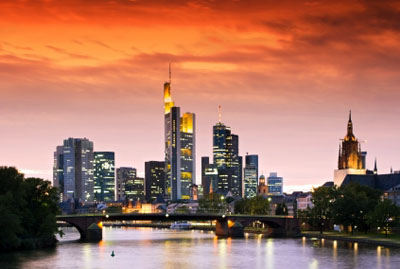 The Commerzbank Tower in the center of Frankfurt, Germany, rises to 850 feet (259 meters). Though the skyline is far more modest than Dubai's, Frankfurt is unique in combining thousand-year-old architecture with the modern. Next, we're off to see the tallest buildings in North America. 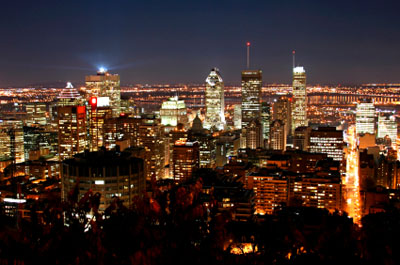 As in Frankfurt, old meets new in the Canadian island city of Montreal. Although the views are nice from the top of Mont-Royal, if you head down the St. Lawrence River to Toronto you can get twice as high. 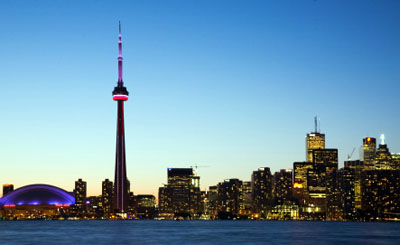 The 1,815-foot (553.2-meter) CN Tower in Toronto holds the world's highest observation deck. Vancouver is the next stop, then we'll explore the best of the United States. 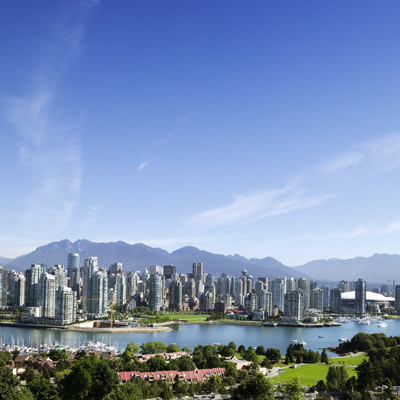 Like the next few cities on the West Coast, Vancouver boasts the dual perks of a waterfront and quick access to the mountains. 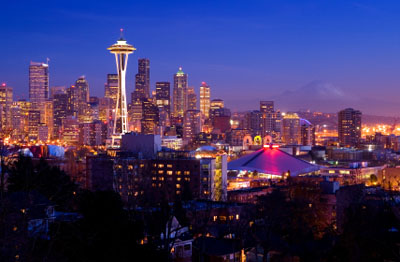 The classic Seattle postcard shot: the 605-foot (184.4-meter) Space Needle makes for an easily-recognizable skyline, and Mount Rainier looms in the distance. 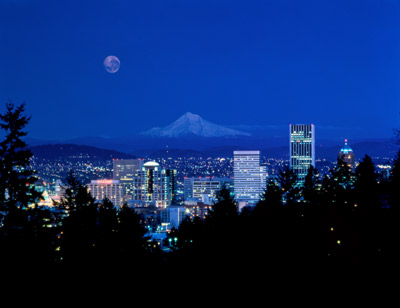 Like Seattle's neighboring Rainier, Mount Hood is visible from many spots in Portland, Oregon. Also nearby is Mount Saint Helens. 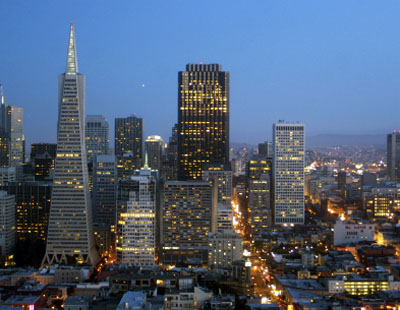 Even without the Golden Gate Bridge in view, San Francisco cuts an interesting profile with its 853-foot (260-meter) Transamerica Pyramid. The west coast skylines are nice, but the best of the United States may lie in the heart of the country. 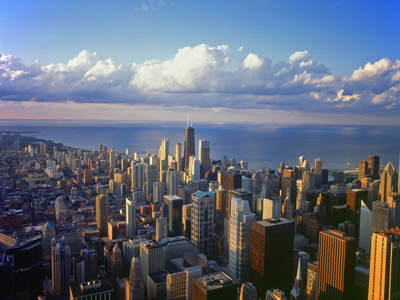 High-rises were born on the shores of Lake Michigan: The first steel skyscraper went up in Chicago in 1885. Today it has 19 buildings that pass 200-meter mark (656 feet). But is it the best skyline? New Yorkers may beg to differ. 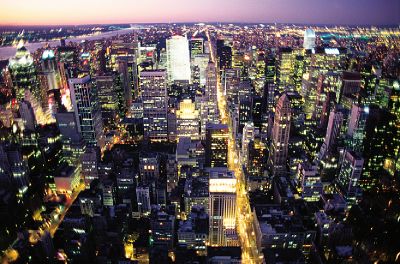 New York City may hold the most iconic skyscrapers ever constructed. Among the 47 buildings over 200 meters (656 feet) in height are gems like the Empire State Building, the GE Building at Rockefeller Center, the Chrysler Building and the former twin towers of the World Trade Center. So New York is an obvious choice, but the next one might surprise you. 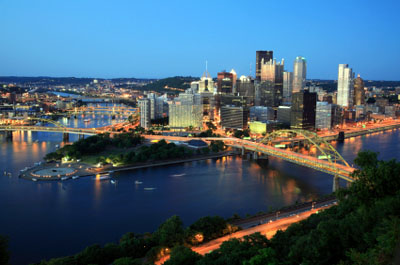 Who knew Pittsburgh had such a good thing going? The heart of the city lies where the Allegheny and the Monongahela Rivers meet to form the Ohio, so in addition to the high-rises, it has more than 400 bridges to help you get around. See another winner in Pennsylvania on the next page. 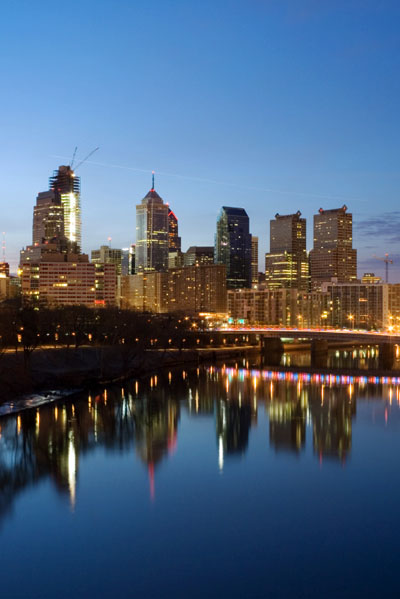 The Delaware River reflects the Philadelphia skyline. The city's architecture ranges from the modern glass-and-steel design to early colonial styles. Head south for the last of the great American skylines. 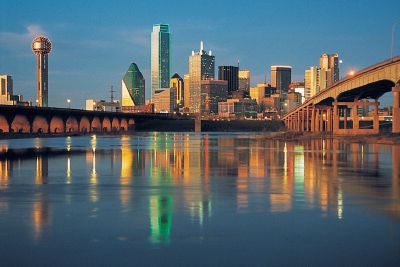 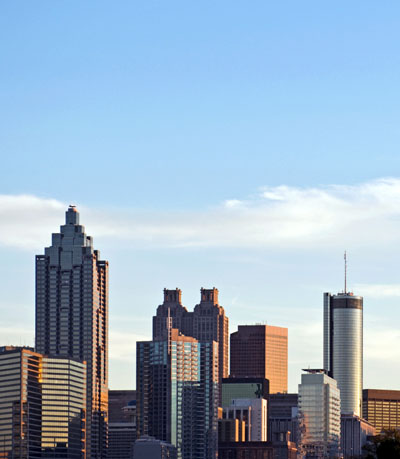 This downtown scene is one of several skylines in the sprawling city of Atlanta. The 1,023-foot (311.8-meter) Bank of America Plaza in Midtown is the tallest building outside of New York or Chicago. The last stop takes us back to the coast. 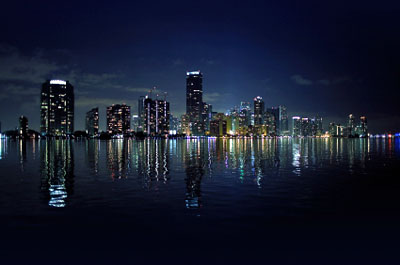 Miami has one of the largest and newest skylines in the United States. Most of its tallest buildings were just completed in the last few years. Learn more about these towering buildings in How Skyscrapers Work.

Why the Ghost of Andrew Jackson Haunts the Modern U.S. Presidency
January 27, 2020

How the White House Press Briefing Went From Daily to Done
January 24, 2020