by John Gottberg
NEXT PAGE 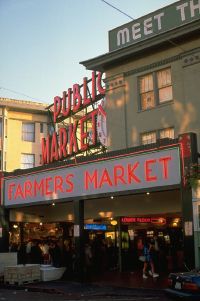 Be sure to head to the harbor during your visit so that you can see the famous Pike Place Market. See more pictures of beautiful cities.
©2006 Seattle Convention and Visitor's Bureau

Say the name "Seattle," and what do you think of? Microsoft, Starbucks, and Boeing. Pike Place Market, the Space Needle, Pearl Jam, and Nirvana. And rain, too.

You're right on all counts, including the rainy climate. But while Seattle skies are indeed gray for much of the year, few cities can compare on the sunny days, which occur more often than you might think.

When the skies are clear, from the window of your downtown hotel room, you can look westward across the harbor, speckled with sailboats and container ships, to the saw-toothed Olympic Mountains. To the north rises the fabled Space Needle; to the south, you'll find majestic and perennially snowcapped Mount Rainier.

In the morning, you can grab a cup of the city's fabled espresso and walk to the rustic Pike Place Market, rising in tiers above the harbor. In the evening, wander up

The Best of Seattle

Why visit Seattle? That depends upon your particular interests, of course, but there's something for everyone. If you're a lover of the great outdoors, there's probably no major city with easier access.

You might spend one day sailing or kayaking between the islets of Puget Sound, another hiking in Cascade Mountain forests, and a third fishing for wild salmon. And if you're here in winter, skiing and snowboarding are less than an hour's drive from the city.

Your interest is culinary? The self-proclaimed coffee capital of the world also has marvelous fresh seafood, distinctive regional cuisine, and the famed Pike Place Market. Industry? Don't miss the Museum of Flight, the Boeing Everett Factory Tour, or the Microsoft Visitor Center. Architecture? The Experience Music Project (EMP), at the foot of the landmark Space Needle, which looks vaguely like a smashed Jimi Hendrix guitar, and the angular new 11-story Seattle Central Library looks every bit as avant-garde as designer Rem Koolhaas's reputation.

And it would be impossible to ignore Seattle's cultural aspects, beginning with its role in contemporary music. The home of Jimi Hendrix and jazz saxophonist Kenny G, among many other Seattle natives, the city has grown to embrace a wide range of modern melody -- from The Kingsmen to Heart, Nirvana to Death Cab for Cutie -- as documented by exhibits at the fine Experience Music Project Museum.

Symphony and theater are similarly alive and well, especially in the Seattle Center. And the top-of-the-line Seattle Art Museum and Asian Art Museum offer collections of world renown.

Geography and landscape: The most northwesterly major city in the United States, Seattle squeezes into a long hourglass shape between Elliott Bay and Lake Washington. Girdled by a ship canal that connects the two larger bodies of water, it's a community of rolling hills, speckled with small lakes and surrounded by high mountains -- the volcanic Cascade Range to the east, the jagged Olympic Mountains across Puget Sound to the west. Seattle covers only 84 square miles and is a mere three-hour drive from Portland, Oregon, and Vancouver, British Columbia.

General orientation: Most streets in Seattle run either north-south or east-west, except the old town area that is bounded by Elliot Bay on the west,

Downtown Seattle nestles on the shore of Elliott Bay, spreading down the slopes of steeply rising hills on the west side of Interstate 5. Immediately north of downtown is Seattle Center, the 1962 World's Fair's site crowned by the Space Needle; immediately south are the professional football and baseball stadiums. Heart-shaped Lake Union, the center point of the Lake Washington Ship Canal and site of numerous restaurants and attractions, is located to the northeast of Seattle Center.

The progressive area of Capitol Hill is east of downtown; upscale Queen Anne Hill is north of Seattle Center. On the far side of the ship canal you'll find the University of Washington campus east of Interstate 5; bohemian Fremont and the Scandinavian enclave of Ballard lie to the west. Further north is the charming Green Lake neighborhood; Seattle's south side tends more toward the industrial and has fewer visitor attractions than the north.

Safety: Seattle is generally regarded as among the safest of American cities, but visitors should still take common-sense precautions. You can discourage crime by having a companion, particularly at night, by knowing your whereabouts and route at all times, and by not displaying large amounts of cash or expensive jewelry. Always stay on well-lit, well-traveled streets, and avoid less touristy neighborhoods such as the Central District, Rainier Beach, and Beacon Hill, especially after dark.

Population: Seattle's population is less than 600,000, but more than 3 million Washingtonians reside in the greater metropolitan area, stretching south to Tacoma, north to Everett, and east to the Cascade foothills.

Climate/weather: Seattle has a reputation for rain. It's well-deserved, but more for the number of overcast days than for the actual amount of precipitation that falls here. In fact, many other American cities -- New York, Houston, and Miami, to name three -- receive more rainfall over the course of a year than Seattle's average of 37 inches. Even when it's overcast, the gray skies are offset by breathtaking mountains and lush greenery.

If you don't like damp weather, you'll want to avoid mid-winter, when temperatures normally range in the mid-30s and 40s (Fahrenheit), and instead visit in mid-summer. July and August are the sunniest, driest, and warmest (averaging in the 80s), but anytime between May and mid-October is worth a gamble on the weather. Despite Seattle's northerly latitude, snow is an infrequent occurrence any time of the year.

You can't take advantage of Seattle's many sightseeing opportunities if you don't know how to get around the city. On the next page, we provide vital advice on navigating Seattle.

on the north, and Broadway on the east. As a rule, only blocks that run more or less east-west are labeled "street" and those that run north-south are labeled "avenue." However, a road, boulevard, way, or thoroughfare may run in any direction.

to the hip Belltown neighborhood for dining and dancing in clubs where the next great band might be seeking its big break. Life in Seattle is never dull, as you'll discover in this Emerald City of the Pacific Northwest.