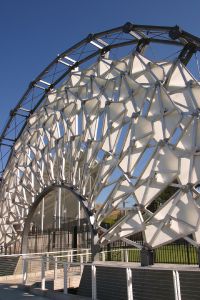 ©2006 The Salt Lake Convention & Visitors Bureau/Eric Schramm Medals were presented in the Hoberman Arch during the 2002 Olympic Games.

The city's founders who built Temple Square envisioned it as the eternal center of the community, but non-Mormons who arrived shortly thereafter wanted a separate city center. For some time there were two competing centers of commerce and trade. One surrounded Temple Square centered on the Zions Cooperative Mercantile Institution (ZCMI), the cooperative venture owned by the Mormon Church. The non-Mormon city center was built around Exchange Place located at Main Street and 400 South Street.

Today, Salt Lake City has developed to the point that both the Mormon and non-Mormon centers of commerce are part of the larger city center core, located in the heart of the downtown.

When pioneers settled Salt Lake, they saved the relatively flat land in the center of the valley for farming, with large acreages and far-flung home sites. But city planners left the sloping foothills on the north side of town for non-farming homes and tradespeople like blacksmiths and artists. Called The Avenues, the area is one of Salt Lake's most charming, filled with quirky historic architecture and boutique shops.

South Temple Street serves as the official border separating The Avenues from the rest of the city. You should stroll along one of the city's great boulevards, which stretches from the historic Union Pacific Railway Building to the University of Utah.

Once called Brigham Street, the broad boulevard is lined with majestic arching trees, impressive churches from several denominations, and historic homes including Utah's Governor's Mansion (603 E South Temple St), which is the restored home of Thomas Kearns, a wealthy Utah senator in the early 1900s. The Catholic Cathedral of the Madeline (331 E South Temple) and First Presbyterian Church (203 S 200 East) are two impressive places of worship on South Temple Street.

Also on the street is Historic Temple Square (Main and North, South, and West Temple sts). Completed in 1875, the Tabernacle on Temple Square is one of the city's most interesting architectural structures. Built without any metal nails, the oblong roof is constructed like a suspension bridge, without any internal supports. The pews are made of native Utah pine, but the pioneer craftspeople developed a special paint technique to create faux oak out of the plain piney benches and woodwork. The counterfeit marble pillars are also pine but were painted to resemble stone.

Also on Temple Square is the Assembly Hall, a beautiful European-style chapel with handsome stained-glass windows built from residual granite stone from the construction of the Mormon Church's Salt Lake Temple.

The city's finest example of international style can be seen at the First Security Bank Building (405 S Main St). It was Utah's first modern skyscraper and was carefully restored to its 1955 appearance in 2004.

The McCune Mansion (200 N Main St) is one of Salt Lake's most impressive turn-of-the-century homes and is opened to the public as a reception center for weddings and corporate events. A mirrored, gilded ballroom occupies the entire third floor, and the house's original decor includes Nubian marble and Utah Onyx. The roof tiles were all imported in 1900 from the Netherlands.

Constructed with unreinforced brick and sandstone in 1894, Salt Lake's City and County Building (451 S State) is Utah's best example of Richardsonian Romanesque architecture. Gargoyles, towers, and intricately carved details of Utah history are carved into the detailed exterior. The building served as Utah's capitol until 1916 and is still used for city council meetings and the mayor's offices. Resting high on the 256-foot-tall clock tower is a tall statue of Columbia, an early symbol of America before the Statue of Liberty.

Famed Israeli architect Moshe Safdie designed the fabulous Salt Lake City Public Library (210 E 400 South St), which opened across the street in 2003. The multistoried entrance resembles a canyon, with the exterior wall mimicking a collapsing ramp that climbs from the center courtyard,

stretching to the rooftop garden.

Two miles east of the new public library, along a TRAX line, is the University of Utah's Rice-Eccles Stadium (451 S 1400 East), home to the 2002 Olympic Cauldron and Hoberman Arch. The architectural Cauldron cradled the Olympic flame during the 17 days of the Salt Lake Games. Now, it's only lit for special occasions and celebrations, like the anniversary of the 2002 Opening Ceremonies, or during other Olympic games.

Large outdoor panels surround the cauldron, each describing the historic events of a specific day during Salt Lake's moment on the world stage. The Hoberman Arch was transported to the university from the city center where it served as the stage for Olympic medal presentations. The spiraling steel semicircle was designed to open and close like the iris in a human eye.

If you'd rather shop than sightsee, Salt Lake City has plenty of interesting stores. See the next section for our suggestions on the valley's best shopping.