Getting In, Getting Around Salt Lake City 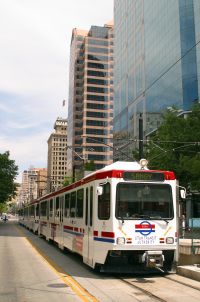 ©2006 The Salt Lake Convention & Visitors Bureau/Eric Schramm TRAX is a light rail line that runs throughout the city center and beyond to some nearby suburbs.

A city without rush hour? Indeed, Salt Lake City is one of the few metropolitan areas that doesn't suffer from major gridlock. Here's our primer on Salt Lake City transportation:

Rental car: Every national rental car company serves the Salt Lake City International Airport (776 N Terminal Dr). Rental car booths are located across the sky bridge from the airport's main terminal. Follow the signs up the escalators from the baggage claim area to get to the rental car booths. Car rental rates can range from $40 per day to $200 per day, depending on the type of car you choose.

Taxi: It's easy to catch a taxi at Salt Lake City International Airport. Taxis line up along the curb in front of the baggage claim areas at both terminals. A taxi ride costs $15 to $20 from the airport into downtown Salt Lake City, but that fare increases if you need to get to ski resorts, which are about 45 minutes away.

Public transportation: The Utah Transit Authority operates a bus service (Route 50) that departs from the airport every half hour beginning at 6:30 am and running through 11:30 pm. The fare is $1.50 per ride, and passengers can transfer to other buses with the same ticket once they get to the city center.

Elite Transportation and Salt Lake City Car Service offer limos and drivers from the airport to the surrounding areas. All Resort Express and Canyon Transportation offer shuttles to the city center as well as to ski resorts in Big and Little Cottonwood Canyons and Park City. And Express Shuttle provides door-to-door service to the airport from any address in Salt Lake City.

Rush hour: Salt Lake is sometimes promoted as the "Crossroads of the West," in part because of the city's central location between the Pacific Ocean and Mississippi River and between the Canadian and Mexican borders. But it's also given that nickname because Interstate 15 (running from San Diego to Canada) and Interstate 80 (running from Boston to San Francisco) neatly dissect the town.

Downtown exits and other tourism destinations are clearly marked with good freeway signs. In town, Salt Lake is laid out on a grid pattern with street numbers radiating from Temple Square. The ski resorts, a major reason people visit the area, are all in canyons east of the city, with good signs off of major roads.

Because of super-sized streets and a new freeway system built for the 2002 Olympic Winter Games, Salt Lake City doesn't experience the rush hour gridlock that are common in other metropolitan areas. But the most traffic congestion on major expressways occurs between 7:30 am to 9 am and 4:30 pm to 6 pm. Watch out for a couple of bottleneck areas on Interstate 15 during these hours, especially if you are entering or leaving the Salt Lake Valley.

Rules of the road: To get your bearings, it helps to remember that the larger Wasatch Mountains are east of the city, which means you can almost always figure out the compass points. Most tourism attractions are in the downtown area or near the University of Utah in the northeastern corner of the city.

Major ski resorts are located in canyons east of the population base. Park City Mountain Resort, Deer Valley Resort, and the Canyons Resort are accessible from Parley's Canyon. Snowbird Ski and Summer Resort and Alta Ski Area are in Little Cottonwood Canyon. Brighton Resort and Solitude Mountain Resort are located in Big Cottonwood Canyon. Sundance Resort is South of Salt Lake in Provo Canyon, and Snowbasin Resort is north of Salt Lake City near Ogden.

Utah residents generally aren't aggressive drivers and rarely use their horns unless it's to communicate extreme frustration, which is quite unlike many drivers from the East Coast. Utah residents also frequently forget to use the turning signal when changing lanes, and you'll occasionally find the slowest car on the road meandering along in the fast lane on the left side of the highway.

Public transportation: The popular light rail line, known as TRAX, is one of the best ways to get around Salt Lake City. It's free in the city center and costs $1.50 each way for fares outside of the downtown core.

The line stretches 16 miles south of the city to the suburban community of Sandy, and extends east for two miles to the University of Utah. Both the University Line and Sandy Line end in the city center between the new outdoor Gateway Mall and the Delta Center, home of the Utah Jazz NBA basketball team.

During the ski season, UTA operates a ski bus service from downtown and suburban hotels to the resorts in Big and Little Cottonwood Canyons. The Ski Bus has external storage racks for ski, poles, and snowboards and costs $3 each way.

Taxis, on foot, or by bike: Salt Lake has reliable taxi service around the Salt Palace Convention Center and near major hotels. But even in the convention district, it's usually smart to call ahead and schedule a ride. Restaurants and hotels are used to calling cabs for visitors and will happily help you make arrangements.

Salt Lake's center is small and you might assume walking is an option, but the city's high altitude, long blocks, and wide streets can make even a short walk seem like a stretch. Many intersections have buckets of orange flags for pedestrians to use to cross the extra-super-sized streets.

Bikes are a great option, and there are numerous city and mountain biking trails, the most famous being the Bonneville Shoreline Trail that runs along the eastern foothills, overlooking the city and the Great Salt Lake. Bikes, however, aren't a practical way to get to many outlying restaurants and attractions.

It's almost impossible to not incorporate the outdoors into some aspect of your visit to Salt Lake City, no matter what time of year it is. There's plenty to keep you occupied indoors as well, as the next section on special events and attractions will show you.