Surfing requires little more than a board, some good waves and a spirit of adventure. It's a sport built for speed, and most enthusiasts of surfing will tell you that it's a way of commuting with nature, a spiritual undertaking akin to yoga or a hike in the forest.

That's probably why it's endured for centuries. Changes in the board's design have been steady, incorporating each era's materials, ideas and technology as a way to constantly improve the pastime. The sport hasn't changed much, but the surfboard has.

Surfing originated in Polynesia, and experts believe the sport was brought to Hawaii by Polynesian settlers. By the time missionaries from North America settled in Hawaii in the 1800s, surfing was the sport of island royalty and the elite -- in fact, two princes studying in the U.S. first practiced the sport on the mainland in 1865. It's as popular in Australia as it is in the U.S., which can be traced to a demonstration given by Hawaiian diver Duke Kahanamoku on a 1914 visit after his star-making turn as an Olympic swimmer.

But up to the early 20th century, surfboard design was relatively crude. The boards were made out of thick, solid wood and could weigh as much as 150 pounds -- for comparison, imagine surfing on your dining room table. To keep them smooth, and as water-resistant as possible, they were "sanded" with coral, and then stained with bark and charcoal and finished with a coat of glossy nut oil.

Today, they're made of water-resistant, lightweight fiberglass, polymers and other synthetic chemicals. But a lot has happened in between. Read on to see how we got from a heavy plank of wood to a precision instrument.

Surfboard Design Before the 1950s

In the late 19th century, surfers used boards made out of planks cut from Willi Willi, Ula, Koa and redwood trees, all native to the Pacific islands. The main problem with using these types woods for surfing is that they aren't particularly waterproof, especially redwood, which was the most commonly used material for surfboards in the early 20th century. The longer a surfer spent out in the water, the heavier and more difficult it became to control the board.

Surfboard designers eventually figured out that more aerodynamic surfing came with a board that was hollow, light and water-repellent. In 1926, surfer and board maker Tom Blake changed things when he fashioned a hollow surfboard. It was cut from redwood, but he drilled hundreds of holes into it, and encased the core piece of wood with thin layers of wood on the top and bottom. It was 15 feet (4.6 meters) long and weighed 100 pounds (45.4 kilograms), but the design made it much faster than traditional surfboards. Blake's board became the first mass-produced surfboard in 1930. He also installed the first rudders, or "fixed fins," on surfboards in 1935. Similar to the rudders on a boat, the component stabilized the board's position in the water.

Blake's hole-filled redwood quickly would become obsolete, however. By 1932, redwood was out, and South American balsa wood was in. It was a breakthrough for fast, lightweight boards, since a balsa board weighed around 35 pounds (15.9 kilograms), or a little heavier if it was made of a balsa/redwood composite. These boards were then coated with layers of resin and fiberglass to make them waterproof.

Up next: the golden age of surfing in both popular culture and surfboard design. 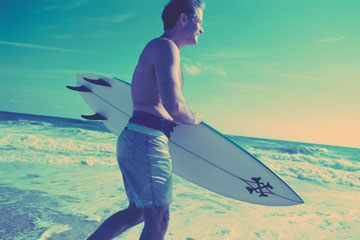 The big developments of the 1950s and 1960s -- flexible fins, lightweight foam and fiberglass building materials, zippy shortboards -- remained the standard for surfboards. But they also served as a template from which surfers and builders could tweak and improve the sport's technology.

It's a fairly recent change in terms of the long history of the surfboard, but the early '70s saw one of the simplest innovations: the leg rope. Surfer Jack O'Neill and his sons fashioned the first ones between 1971 and 1973 out of pliable, flexible surgical tubing. One end attached securely to the board's tail with an embedded plug, and the other hung as an anklet on the surfer's leg. The point was that whenever a surfer wiped out, he didn't have to chase down his board underwater or wait for it to wash ashore before getting back up and trying again.

Another major development made in the '70s is the tri-fin, a variation on the underside surfboard rudder. These are attachable, stick-on plastic fins that could be mounted in any formation on the outside of the permanent, factory-installed fin. The extra weight adds stability to the rear, enabling more control.

Changes to surfboards in the '80s were more about individual change and experimentation on the board's different elements and parts, not so much a redesign of the board or the introduction of new elements. Australian surfer Simon Anderson solidified the permanent three-fin surfboard, an outgrowth of the interchangeable tri-fin system, in 1981. Called a "thruster" board, it provides excellent stability in the pocket and remains a standard.

What's a surfboard from recent years look like? Read on.

Surfboard Design in the 1990s 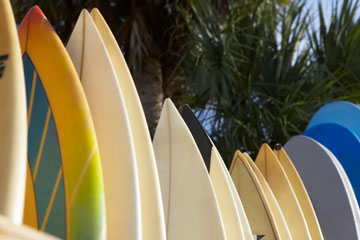 There is a wide variety of surfboards to choose from.
Jan Cobb Photography Ltd/Photographer's Choice/Getty Images

The major development in surfboards over the last 20 years has been the many different kinds of surfboards available, each suited to different tastes or wave-tackling abilities, the result of tinkering with heavily entrenched surfboard designs.

Developments have focused around the rail curve and what can be done with the board's underside. Different rail curves are available for different surfing abilities. A straight-cut rail allows for a faster turn; a softer, curved rail slows down turns and is better for beginners. As for the underside, shapes are cut to redirect water flow. A double-concave bottom surfboard shifts water through two small depressions, allowing for a smooth ride and easy control. A V-bottom offers a V-shape in the middle of the board, which helps mount vertical waves.

Designers now offer up several overall styles of surfboards, including the fish board (for short, flat waves), the Mini Malibu (long and wide, the modern incarnation of the longboard) and the longboard gun, which combines the lightness of a shortboard with the length of a longboard, allowing the surfer to tackle big waves, especially during tow-in surfing. Prior to the development of the longboard gun, surfers wanting to access waves higher than 25 feet (7.6 meters) had to be towed out because they couldn't paddle fast enough to reach them in time. Modern gun boards give the length necessary for stability along with the speed to reach those waves.

Manufacturing is more streamlined and precise, more so in recent years because of board-designing software. The CAD/CAM program from D.A.T. hit the market in 1994 and has been updated many times since. It can be linked to automated machinery, fully automating the process of building a surfboard out of synthetic materials to exact specifications -- a long way from the heavy redwood logs of the 19th century.