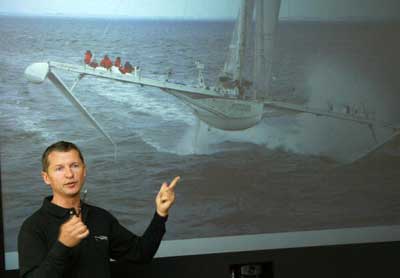 Fast Frenchmen and world record holder for nautical speed Alain Thebault talks about his 'flying boat' Hydroptere. He plans to build a maxi-hydroptere capable of sailing at 50 knots (around 58 mph).
AFP/Getty Images

Now that we understand how the boat moves, let's get to the good stuff: speed. A vessel's top speed will vary, depending on its size and purpose. For instance, sleek racing sailboats are designed specifically to maximize speed, but larger, bulkier ships will plod along more slowly due to drag and friction.

The nautical measurement of speed is the knot. One knot is equal to about 1.15 mph. According to the World Sailing Speed Council, the current record holder for the fastest nautical mile is Alain Thebault from France with a speed of 41.69 knots -- or about 48 mph. Given that the wind was Thebault's sole power source, that's pretty fast! The knot dimension is based on the circumference of the Earth. You can read more about how nautical miles compare to miles and kilometers by reading What is a nautical mile?.

Since Thebault was going 48 mph, you may be wondering if that means the wind was blowing that fast. Probably not. Thebault likely was moving faster than the wind because when sailboats create lift, as we discussed earlier, they create their own additional wind, called apparent wind.

It's important to understand that there are two types of wind at work when sailing: true wind and apparent wind. You feel true wind when you're standing on the dock or if the boat anchors. This wind makes the waves in the water. Apparent wind is what you feel while the ship's moving -- a combination of the true wind and the wind that the boat's motion creates. This is the wind that powers the ship.

So it is possible for some boats to beat the wind, particularly slimmer, more aerodynamic models that have less drag or friction in the water, such as yachts and catamarans. But remember, to sail faster than the wind, these types of boats must travel at an angle to it, rather than straight downwind or upwind, to stimulate lift and accelerate apparent wind.

As sailing technology advances, boats are becoming faster and more efficient than ever before.