A Closer Look at the Sailboat Keel 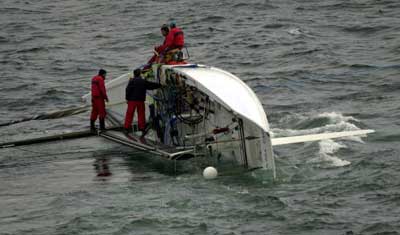 The long, white board on the right-hand side of the picture is the keel. Normally you don't see the keel since it's underwater.
Getty Images

The keel has two main functions: to keep the boat from being blown sideways in the wind (lateral resistance) and to hold the ballast. The ballast is a weight traditionally at the bottom of the keel that keeps the boat right-side up.

When the sails interact with the wind, a lot is also happening underwater to help create lift and allow the craft to recover from tacking. When a boat heels, or tips sideways in one direction when tacking, the ballast prevents it from going completely over. Positioned beneath the sailboat toward the center of the hull's underbelly, the keel's broad, flat surface creates sideways force by displacing water in the opposite direction that the boat is tipping. Although the keel has a much smaller surface area than the sails, the density of the water allows it to initiate a force strong enough to cancel out the heeling motion. That resulting equilibrium is called the righting moment.

You're probably familiar with the strong force of the keel if you've used a canoe paddle to change a canoe's direction. Although the paddle has a relatively small surface area, when turned against the current, you can feel the strength of its resistance as it becomes harder to hold.

Given this delicate balance among the wind, water and boat, sailors must tack carefully to avoid capsizing the boat, monitoring the angle at which they tack. If they tack the boat at too tight of an angle, the force of the wind will be too great for the keel and the water to overcome.

The maximum angle that a boat can tack and recover from is 30 degrees [source: US Sailing]. Sailors can tell the angle at which they approach the wind thanks to telltales, or strands of yarn-like material attached to the mainsail. Depending on how they blow when the sails are pulled tightly, they reveal the angle to the wind. Ideally, they will blow straight out, indicating even airflow across the sails and the optimum tacking angle. This is referred to as banging the corners, or sailing efficiently.

Read on to learn just how fast these wind machines move.

Down the Hatch, Matey

Here are a few sailing-related sayings in case you ever find yourself tongue-tied at sea.

Toe the line: Planks in wooden ships were sealed with a dark substance, giving the appearance of a striped deck. When ordered to line up, crews would keep themselves aligned by stepping their toes directly up to one of those stripes.

Boot camp: A training camp for Navy or Marine recruits. The term originated from sailors fighting in the Spanish-American War who wore leggings called boots.

Down the hatch: Comes from the idea of cargo being loaded down into the hatch below the deck.

Show one's true colors: Warships would try to deceive their enemies by hanging different countries' flags. However, to open fire on an enemy, the civilized rules of war required them to fly their nation's true flag.