How Sailboats Move in the Water 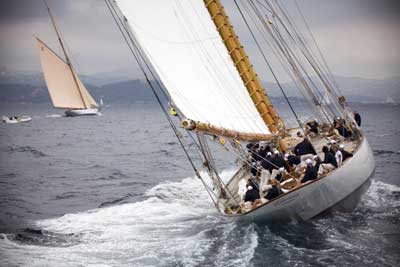 Sailing a boat is simple when you're navigating downwind with the wind at your back. You let out the mainsail perpendicular to the wind to capture the most energy. As the wind presses directly into the sails to make them puff out, that natural force propels the boat forward.

Plotting an upwind course, against the wind, is much harder. Compare the difference between running with the wind behind you and running with the wind gusting at you. You exert more energy to run into it, rather than enjoying the gentle push of it at your back. In fact, it is impossible to sail directly upwind. Either the opposing force of the wind will push the boat backward if the sails are let out, or it will stall the boat if the sails are pulled in and slack. Sailors refer to this as being in irons. Instead, to reach an upwind destination, crews use a method calling tacking.

While the wind pushes the boat when going away from it (downwind) the opposite happens when going toward it (upwind). "When you sail upwind, the boat is actually being pulled rather than pushed by the force of the wind," says Bryan Kelly, sailing instructor at Sail Newport and membership assistant with US Sailing, the national governing body of sailing in the United States. That forward pull is referred to as lift. For that reason, sailors steering upwind must take a zigzagging path called tacking. By doing so, the wind approaches at an angle rather than head-on.

When tacking, the sails act as the engine of the boat, harnessing wind power. However, since the boat is moving angled to the wind, that wind power pushes the boat sideways. But remember that the wind isn't the only element the boat interacts with. There's also the water. As the boat tips to one side, the long, flat keel submerged underneath the hull, pivots upward with the motion of the boat, creating a sideways force in the opposite direction because of the amount of water it displaces as it moves.

When tacking successfully, these equal, opposing sideways forces cancel each other out. However, that collected wind power must go somewhere, so it is released in a forward thrust -- there is nowhere else it can go. This is the same type of effect that happens when you shoot a marble. Your finger and thumb press equally hard on either side of the marble, causing it to zip forward.

After this happens, the sailor would alter course and tack again toward the opposite direction to gradually move upwind.

In the next section, we'll dissect the physics of lift that pull sailboats forward into the wind and what they have in common with kites.