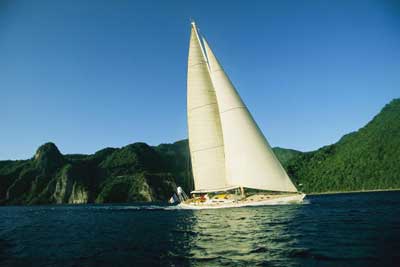 Sailboats are one of humankind's first and most revolutionary transportation inventions. Powered mainly by the wind, these simple but incredible machines opene­d up new pathways for international trade, exploration and cultural exchange, which shaped the modern world.

Although no one knows when the first sailboat was built, archeologists have found remains of primitive canoe-like vessels dating back to ancient Egypt and Mesopotamia. Since then, boat design has developed steadily to enhance speed, ma­neuverability and cargo load, reflecting unique aesthetic and technological innovations.

­For example, to construct their signature dragon-headed boats, Vikings used axes rather than saws to cut longer, lighter pieces of wood that allowed for faster travel. These longboats, called drakkar, dominated the seas by taking advantage of wind in their square sail for long distances and of oarsmen for swift attacks [source: Hadingham]. Later, 15th-century Chinese junk boats with their distinct scalloped sails were so well-crafted to withstand regional typhoons that they reached the east coast of Africa and the Persian Gulf more than 50 years before European explorers [source: University of Calgary]. Today, specialized racing yachts slice through the water at speeds faster than the wind.

While these amazing ships range in size and capability, all are linked by the fundamental elements of the common sailboat. Whether large or small, vessels of the past and present share the same flotation and movement abilities. In this article, we are ­going to explore how the basic parts of a sailboat work together, how physics principles allow them to float and move and how sailboat design continues to evolve.