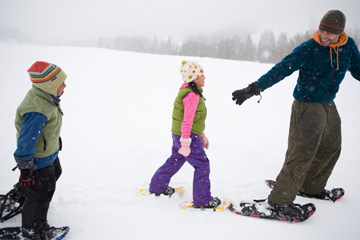 Snowshoeing can be a fun activity for the entire family. See more pictures of winter sports.
Caroline Woodham/Photodisc/Getty Images

In these modern times, when snow falls, we tend to stay inside by a nice, warm fire. Our ancestors didn't have that option, though. In 4000 B.C., people living in Central Asia needed a way to hunt and migrate even when the snow was as high as their waist. It wasn't a matter of convenience, it was a matter of survival. So, 6,000 years ago, around the same time that the wheel was invented, these people strapped flat materials to the bottoms of their feet, which allowed them to walk around as if they were floating on the snow [source: Samuels].

Throughout the next six millennia, snowshoes continued to get people to places that would otherwise be impassable due to snow. These days, however, we're much more likely to use snowshoes for winter recreation than for survival. Snowshoeing has become a popular activity because the equipment is relatively inexpensive (and much less bulky and unwieldy than the snowshoes that were in use just a few decades ago), and it requires very little specialized skill. Many of the sport's aficionados claim that if you can walk, you can snowshoe, making it a viable option for everyone from young children to aging adults.

The next time you're at a ski resort but don't feel up to whooshing down the slopes all day, you might consider snowshoeing; many resorts and gear shops rent snowshoes to those who'd like to try them out. Or, if you live in a snowy climate and spend most of your winter exercising in a smelly gym, you could purchase a pair for less than the cost of a treadmill and get a workout that burns more calories than running [source: Pennington]. Snowshoes are often used by hunters, because it leaves their hands free to hold a gun. And if you'd just like to get closer to nature, in quiet, snowed-in nooks that even skiers can't reach, then snowshoeing may be just the hobby for you.

But how do these contraptions even work? How can strapping on a snowshoe keep you from sinking into the snow? 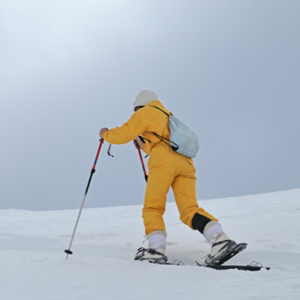 With snowshoes, you can hike the French Alps without sinking into the snow.
Sami Sarkis/Photographer's Choice RF/Getty Images

There are a few feet (or meters) of freshly fallen snow outside your door. If you try to walk to your car in just your tennis shoes or boots, your feet will sink through that snow to the ground, leaving you with wet feet and damp clothing. But then, if you were to strap on a pair of snowshoes, you could reach your car without a speck of snow on you. How is this possible?

In very simple terms, snowshoes work by having a larger surface area than the bottom of your boot or tennis shoe. That larger surface area means that you have more snow supporting your body weight from below when you wear a snow shoe than you'd have if you were just wearing a size nine shoe. That extra surface area also redistributes the weight coming down on the snow from above. In other words, snowshoes help you to maximize a measurement known as pounds per square inch, or PSI; in this case, the amount of pressure that your body weight puts on the snow. In a tennis shoe or boot, there's a lot of body weight distributed over just a few inches; on a snowshoe, the body weight is spread out over many more inches.

That's why one pair of snowshoes doesn't fit all -- heavier people, or people carrying larger packs of supplies, will need bigger snowshoes. Lighter people won't put as much pressure on the snow to start with, meaning they can use a smaller pair of snowshoes. The snow conditions also matter. Packed snow, as opposed to fresh-fallen, fluffy snow, can take more pressure than the new flakes, so a trek across a newly dusted field of snow may require different snowshoes than a walk on a path created by a snowmobile.

There are a few different ways to use snowshoes:

Once you know how you'll be using your snowshoes, you can decide what style of snowshoe will suit you best. An Alaskan snowshoe, for example, is very long and narrow with upturned toes, almost like a ski. These can be harder to maneuver and explore in, whereas bearpaw snowshoes are much more compact. Rather than having a long tail trailing behind the main part of the shoe, bearpaw snowshoes are just an oval, which is good for maneuvering but not as good as walking through deep snow. The middle ground, style-wise, is a beavertail snowshoe, which has a teardrop shape a bit like a tennis racket -- it has the oval shape of the bearpaw combined with the tail of an Alaskan snowshoe. The beavertail style is very common and may be what most people think of when they think about snowshoes.

Regardless of the style, all snowshoes are constructed in the same basic way. The circumference of the snowshoe is called the frame; traditionally, this part was made out of wood, but many models are now made with aluminum. Wooden snowshoes are still available, but they are more expensive and require a yearly varnish. Within the frame is the decking, or the interlaced mesh that bears the body's weight. Traditionally made out of rawhide, modern snowshoes usually have plastic decking now. Underneath the snowshoe are crampons, or cleats that provide traction; a snowshoe designed to climb mountains may have many more crampons than one made for walking. Lastly, bindings are important, as they hold your boot onto the snowshoe.

Getting started with snowshoes is very easy. It's like walking, but with a wider, longer gait, so that you don't step on your other snowshoe. You can use ski poles for balance and to work your upper body, but they aren't required. While snowshoeing is very easy to get the hang of, don't underestimate the workout that you get. You'll feel much more fatigued after an hour of snowshoeing than you would after an hour of walking. For one thing, your body is doing a lot more work by lugging the extra weight of a snowshoe on each foot. That means that beginners should be mindful of overexertion their first few times out, but that's not the only safety tip we have to share -- there's much more on snowshoe safety on the next page. 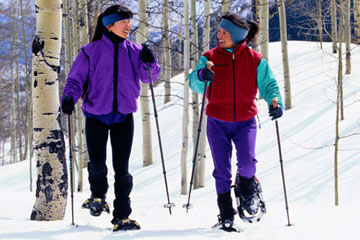 For other ways to have winter fun, see the links on the next page.