by Tiffany Connors
NEXT PAGE 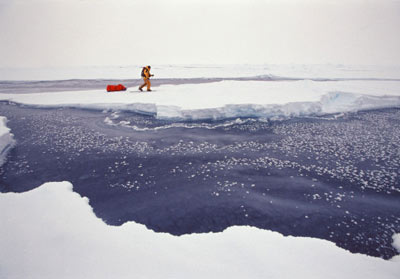 If Santa Claus really does reside at the North Pole, he must live a lonely life -- and have a weird sleep schedule.

The North Pole isn't what most of us would consider a hospitable place. The average winter temperature there is 40 degrees below zero Fahrenheit (-40 Celsius), and the mercury rises to a balmy high of 32 degrees above zero (zero C) in July, the warmest month. And while Santa's reindeer are considered Arctic animals, not much life actually calls the North Pole its permanent home.

Santa lives with 24 hours of daylight for six months of the year and dark for most of the other six, so it's no wonder he feels the need to escape, even if it's just to deliver toys once a year.

But even if you could figure out where Santa was, buying a house in the same neighborhood would be difficult because, technically, there isn't any real estate at the North Pole. Beneath the 6 to 12 feet (1.8 to 3.6 meters) of ice and snow is the 13,000-foot-deep (3,900-meter) Arctic Ocean.

But this is all assuming that Santa lives at the geographic North Pole, as opposed to the magnetic North Pole.

For adventurers not interested in finding Kris Kringle, the North Pole is comparable to outer space: an unknown frontier that's ripe for exploration -- and exploitation. The region doesn't belong to any one country, so there are always disputes about who can lay claim to the untapped natural resources there. And although the prospect of melting ice around the North Pole isn't pleasant from a global warming standpoint, it could make those resources easier to reach.

So what do you need to know before you plan that trip to the North Pole? Who's been there already, and why is it so alluring to the current generation of explorers? Beyond the weather, there is much to learn about the North Pole. All that, and Santa, too.