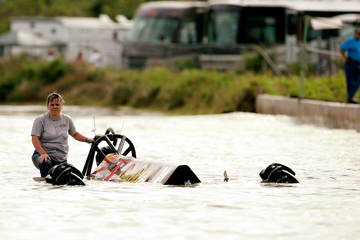 How do you get across alligator-filled, marshy wetlands where the water can be 12 feet (3.7 meters) deep in some places? It's easy. You just need something like a dune buggy -- only much bigger. There's off-roading, and then there's going in places where roads can never exist -- that's what swamp buggying is all about.

A swamp buggy is typically a huge vehicle with big, balloon tires and raised passenger seats that's designed to drive (or race) through swampy areas. Like dune buggies and sand rails, they come in all shapes and sizes, but they usually feature open-air, tank-like bodies with platforms on top. Sometimes a 4x4 truck simply won't cut it -- a swamp buggy is the only way to get across the wetlands.

Swamp buggies originated in the 1930s and 1940s and became popular for exploration and hunting purposes. Built with balloon tires, gun racks and crazy names, these buggies were often the only way to traverse the boggy mires of the Florida swampland [source: Swamp Buggy Races]. Some buggies have several seats up top and are used to tour areas like the Everglades.

Of course, like all vehicles, someone quickly found a way to race swamp buggies. Three times a year, the Swamp Buggy Races are held at the Florida Sports Park in Naples, Fla. Since the early 1940s, the races have drawn crowds from across the country to watch the buggies blast across an off-road driving track called the "Mile o' Mud."

A variety of swamp buggy classes compete in the race, from four-cylinder Jeeps to custom-built, Chevy V-8-powered creations that top 1,000 horsepower! [source: Swamp Buggy Races] It's one of the most unique events in motorsports.

Up next, dune and swamp buggies are good for getting where you need to go, but how do you get the vehicles there in the first place?