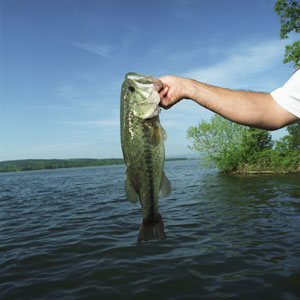 Bass have strong, wide mouths that can be used to safely hold the fish.
Michael Edwards/Getty Images

Fish caught in shallow water can inju­re themselves thrashing around on rocks. So if you're in a river angling for a nice brown trout, try not to land it in shallow water. Look for a deep pool nearby. Once it's time to get the hook, see if you can do it with the fish still in the water. If you need to get the fish out of the water, wet your hands and lift it, holding it firmly by the tail and supporting it gently under the belly. Avoid touching the gills or squeezing the fish.

Use needle-nose pliers to remove the hook. Grasp the hook by the stem and, while holding the fish in the water, twist and pull gently, backing the hook out the way it came in. Don't ever wiggle the hook or pull with too much force if it's snagged. If the fish is gut-hooked or the hook is too deep into the throat, it's best to cut the hook as close to the body as possible and leave it in there. Many times the hook will simply dissolve and get spit out. The fish has a better chance at living than if you struggle to free the hook.

Once the hook is out, you need to revive the fish. "Tossing a fish" back into the water should remain an expression. Never throw a fish into the water. If you're bass fishing, you can hold the fish by the lower jaw and ease it back into the water. If it's a trout or another non-bass, lower the fish headfirst with both hands the same way you handled it out of the water, supporting the belly. If it's a river catch, point the fish with its head upstream in a slow current. You may need to help it out some by moving it gently back and forth to allow water to flow into the gills. The same holds true for lake fish. Once it begins to come around and tries to swim away, simply release your grasp. Larger fish may take a little longer to revive.

If you plan on catch-and-release fishing, be prepared ahead of time. Get the proper tackle, have your pliers within easy reach and the camera ready. Fish can only live for a few minutes out of the water, but you should never even come close to using this amount of time. Try and keep the time out of the water to less than 30 seconds. Experienced catch-and-release fishermen never allow the fish to leave the water at all.