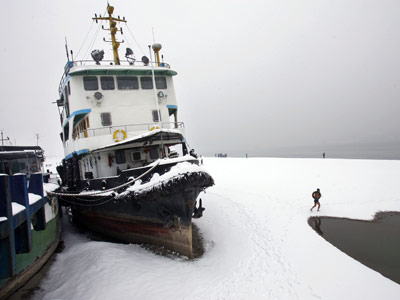 The Yangtze River is important for China's fishery industry, but water levels have dropped and pollution has increased in recent years.
China Photos/Getty Images

Not all fish are caught in the wild. ­In fact, according to the 2006 report from the Food and Agriculture Org­anization of the United Nations (FAO), fish farms produced more than 45 million tons of fish in 2004 [source: FAO]. Fish farms are a type of aquaculture. Aquaculture is the growing and harvesting of aquatic organisms and can apply to both freshwater and saltwater plants and animals.

These cultivated fisheries come in many shapes and sizes. Some are manmade ponds or lakes. Others are large tanks filled with hundreds or thousands of fish. Another kind uses nets or other barriers to fence off part of a natural waterway. The most common types of fish you'd find in fish farms include catfish, tilapia, salmon, carp, cod and trout.

Fish farmers have to know a lot about the type of fish they wish to raise, including understanding the conditions in which the fish reproduce. Because fish farms often group thousands of fish into a relatively small environment, farmers have to be sure the type of fish they cultivate can cope with crowded conditions. Farmers also need to understand the feeding habits of the fish to maximize their return on investment.

­The most obvious advantage to relying on fish farms is that the farmer has complete control over how many fish he or she harvests at any one time. Through careful management, the fish farmer can keep the stock population at a sustainable level.

But there are other factors the farmer must keep in mind. Some fish farms group large populations of fish in relatively small areas. Disease and infection are a constant threat. A diseased fish can infect dozens of others as it rubs up against them in the enclosure. Before long, infection can corrupt an entire harvest.

Parasites are another problem. Sea lice are a kind of parasite that attack fish like Atlantic salmon. If the fish farm connects to natural waterways, the parasites can spread from the wild fish to farmed fish.

Another concern for fish farmers is pollution, both from within the farm itself and from outside sources. The waste from the fish can pollute the waters of a fish farm. Some farmers collect the waste and sell it as fertilizer. Other farmers will release waste water into the environment. The chemicals, drugs and waste in the water can be very harmful to the surrounding area. Fish farms that rely on natural water sources are also vulnerable to external pollution. Chemicals from pesticides or fertilizers can harm the fish.

Together, wild fisheries and aquaculture are a big business. Let's take a closer look at the numbers in the next section.

Some fish farms raise mollusks rather than finned fishies. As you can imagine, mollusk farmers can take their time during a harvest.