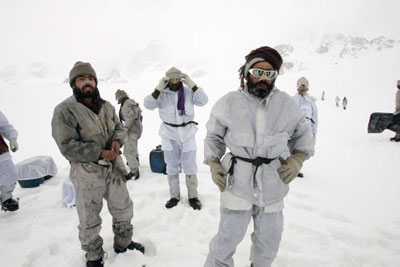 HAPE is caused by excessive fluid in the lungs. For some people, the lack of oxygen at high altitudes can cause blood vessels to constrict. The body responds by forcing blood through unrestricted vessels, which results in high blood pressure and blood vessel leakage. This leaked fluid then builds up in the lungs, interfering with the normal exchange of oxygen. This results in further oxygen loss in the already-depleted bloodstream.

Because of some similar symptoms (such as fluid in the lungs and difficulty breathing), HAPE is sometimes misdiagnosed as pneumonia. This can be a fatal mistake. A person afflicted with HAPE may take a sudden turn for the worse, fall into a coma and die within a few hours. HAPE usually manifests at night, and many climbers have been found comatose in the morning by their companions.

If two or more symptoms are present, it's best to immediately descend and get medical attention [source: Shlim]. You should be aware of other signs of HAPE -- you may have a fever, make a "gurgling" sound while breathing or find that lying flat on the ground is extremely uncomfortable.

With advanced symptoms, you probably won't have the strength to descend on your own -- you'll need help. This is just as well, since HAPE can result in high blood pressure that only worsens with physical exertion. As with severe Acute Mountain Sickness, the most important thing is to descend as soon as possible. Even after medical treatment, there is still a 10 to 15 percent chance that HAPE will be fatal [source: Dietz].

Living in the Clouds

There are some competing claims to the title of "highest permanent human settlement." Many of these contenders are not year-round habitations, but rather seasonal herding grounds (in Nepal and Tibet, for example) or military and research installations that either do not operate in the winter or are staffed by personnel that rotate in and out of the location.

La Rinconada, a mining village in southern Peru, seems to have earned bragging rights to the title, however. For more than 40 years, the more than 7,000 townspeople have lived at a chest-heaving 16,700 feet (5,090.16 m) above sea level [source: West].