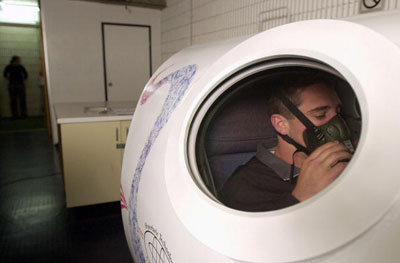 Athlete Brent Sherwin is treated inside a hyperbaric during training at Belmore Sports Ground, Sydney, Australia, in 2001. Portable hyperbaric chambers or gamow bags can be used to treat altitude sickness.
Chris McGrath/ALLSPORT/Getty Images

High altitude can wreak havoc on our bodies -- and you can only do so much to prevent it. Once you've got altitude sickness, you've got to treat it. Here's how.

While medications can alleviate symptoms of mild or moderate Acute Mountain Sickness (such as headaches), they aren't cures. Descent or acclimatization is the only cure for AMS. Pure oxygen reduces the effects of altitude sickness, though many climbers report that ginkgo biloba prevents or alleviates symptoms of altitude sickness. Ginkgo has proven an ineffective treatment in recent tests, however [source: Dietz].

There are three important things to remember about altitude sickness:

Anyone with High Altitude Pulmonary Edema should immediately descend. If the case is severe, he or she may need to be carried down or airlifted. If immediate descent isn't possible (due to inclement weather, for instance), there are some options to help treat the condition. You can use pressurized oxygen or a portable hyperbaric chamber to help restore breathing. Someone afflicted with HAPE should rest as much as possible. Since lying flat will cause discomfort, you should elevate one end of his or her sleeping bag or bedroll.

Some drugs that may help are nifedipine and frusemide. Nifedipine is a blood pressure medication that lessens the pressure in the pulmonary artery that causes HAPE, thus improving oxygenation. Its use will result in a lower blood pressure, so one should keep this in mind and not stand up too quickly after it has been administered. It has been used to prevent HAPE in those who have a previous history with this condition [source: Rees].

Frusemide may help remove excess fluid from the lungs, but it can have serious side effects in those who are dehydrated.

Like HAPE, a person with High Altitude Cerebral Edema needs to descend immediately and seek medical help. Alternate courses of action can be taken to alleviate the conditions and prevent HACE from worsening.

The afflicted party can take Dexamethasone, which reverses swelling, including brain swelling. Though it can be used in a preventative manner, Dexamethasone is a powerful drug that may cause serious side effects. But in extreme conditions, it can save the life of someone suffering from HACE -- especially if that person has to stay put through the night before descending. It is reputed to revive people who have fallen into a coma from HACE. You can also provide oxygen to the HACE patient and put him or her into a portable hyperbaric chamber.

If you can't make a descent, you can at least fake it by using a Gamow bag, which is a portable hyperbaric chamber. This device weighs about 15 pounds and consists of a sealed compartment and a foot pump. After a person is placed inside, the compartment is pumped full of air, increasing the amount of oxygen and simulating conditions at lower altitudes. In about two hours, conditions inside the bag mirror those of an elevation that is around 3,000 to 6,000 feet (914.4-1,828.8 m) lower than the bag itself. The person's body acclimates to those conditions, and this acclimatization persists for up to 12 hours, allowing the person time to make a descent.