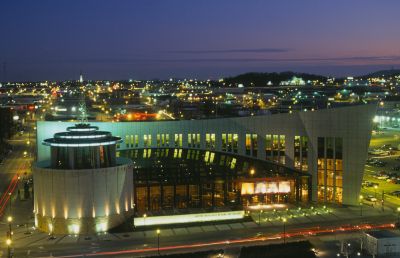 ©2006 Barry M. Winkler Even if country music isn't your thing, you should still check out the Country Music Hall of Fame & Museum while visiting Nashville.

Music City USA is where the song never ends, and not just because it's a recording capital. There are so many varieties of tunes being written in Nashville, along with the artists who interpret them. There's likely enough rock, jazz, bluegrass, country, and gospel to go around forever.

Nashville is in another "pop explosion," since several lead vocalists like Leigh Nash (formerly of Sixpence None the Richer) and Matt Kearney are getting onto the mainstream charts. And Faith Hill and Martina McBride are among those also thought of as adult contemporary artists. Not to mention those who have laid tracks here before, such as India Arie to Jimmy Buffett to Matchbox Twenty.

Insider's Guide: The Best of Nightlife & Entertainment in Nashville

Insider's Guide: The Best of Nightlife & Entertainment in Nashville

If you have a song in your heart, then get it on paper. Go to a workshop to hear composers (every Saturday at noon) at the Country Music Hall of Fame & Museum (222 Fifth Ave). This 130,000-square-foot building faces a 3-acre park and has an 11,000-square-foot conservatory. Each year, musical artists are elected to the hall of fame by 200 of their peers, and their plaque is hung in the hall. Admission to the building is free, and you can view three floors of exhibits.

Traditional honky tonks like The Stage (412 Broadway, 615-726-0504) feature an amazing blend of country, southern rock, and good ol' rock 'n' roll. The Legends Corner (428 Broadway) is considered a tried-and-true honky-tonk saloon with its country music record covers on the walls and contemporary acts making their mark on the stage. The extensive drink menu and cold beers keep people coming back -- that, and its late hours until 3 am.

Whether you like your "Honky Tonk Ba Donk A Donk" (ala Trace Adkins) or Boot Scootin' Boogie (as do Brooks & Dunn), you can get in on free country line dancing lessons at the Wildhorse Saloon (120 Second Ave). Lessons are usually available about 6 pm on Monday through Friday or at noon on Saturday and 2 pm on Sundays. If you don't want to dance, you can sit back and listen to country music's biggest stars perform.

Make the rounds of Music City USA for blues at B.B. King's Blues Club & Restaurant (152 Second Ave N). This is a jazzy joint that will treat your eardrums with quality jazz and blues tunes and your taste buds with such treats as fried chicken, Sonoma white cheddar mac 'n' cheese, and cornbread pudding.

The Mercy Lounge (1 Cannery Row) features national acts in this club with a laidback atmosphere, pristine hardwood floors, vintage couches, and two S-shaped bars. You can catch a band in the front room, meet friends or fellow travelers for drinks at the main bar, or head to the back room for red-felt pool tables and vintage pinball machines.

The Coco Loco Nightclub Lounge (4600 Nolensville Pike) is a tropical-themed dance club that serves a good mojito drink. You can dance to the salsa or merengue amid fake palm trees and neon pink, green, and blue lamps. The dance floor takes up over half of the room.

The Tin Roof (1516 Demonbreun St) is a rockin' nightspot that hosts live bands six nights a week -- everything from classic to contemporary rock to country. The bar has a casual atmosphere and brightly colored beer glasses with the slogan, "Stolen from the Tin Roof."

Excess/Orbit (9091/2 Church St, 615-255-4331) features an upstairs club called Excess with a dry bar and dimly lit dance area surrounded with mirrors. Orbit is a basement-like downstairs club with low ceilings and black lights. The big draw is that it's the place to go for late-late-late night dancing between 3:30 am and 5 am.

Celebrity-watching can be done at restaurants from Green Hills to Franklin, including Mobil Three-Star Merchant's (401 Broadway) and Granite Falls (2000 Broadway), but you're just as likely to get a sighting at Nashville's International Airport. Musicians are always taking flights before and after their weekend gigs.

Be sure to take a breather from all the high-octane entertainment and have a slow-paced day. The next section offers suggestions on how to relax and unwind in Nashville.