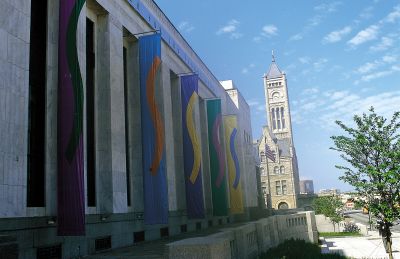 Nashville, otherwise known as "the Athens of the South," is undergoing a renaissance, not unlike the one it experienced in the 1800s when many of its colleges and universities were established. In 2006, the American Arts Association named Nashville as the No. 6 city in the United States for its volume of nonprofit cultural arts organizations.

The Nashville Symphony Orchestra also has a reputation as one of the leading city orchestras in the southeast. The Tennessee Performing Arts Center, the first state-funded facility of its kind in the nation, is home to the Nashville Ballet, the Nashville Opera, and the Tennessee Repertory Theatre.

In the area of visual arts, Nashville is a citywide gallery of creativity with such places as Cheekwood Museum of Art, a cultural arts center and a physically impressive gallery, and the Van Vechten Gallery at Fisk University, which houses more than 100 pieces from artists like Picasso, Renoir, and O'Keeffe.

With a broad stroke, Nashville is also painting the town with a new sculpture going in at Riverfront Park. And, you'll notice the funky-designed catfish and guitars outside some businesses, along with wacky "Arts In the Airport" works at the Nashville International Airport.

Insider's Guide: The Best of Arts & Culture in Nashville

Insider's Guide: The Best of Arts & Culture in Nashville

The Frist Center for the Visual Arts (919 Broadway) has grandeur, with its black, grey, cream, and silver Art Deco motif inside the former Nashville U.S. Post Office. The rotating displays (every six to eight weeks) are just as stunning, along with traveling exhibits that last a few months. The only permanent gallery is ArtQuest, which has about 30 hands-on activities for the whole family. The gift shop is also one of Nashville's best in a museum, where you can get the Spirit of Nashville prints of historical landmarks to intricate beadwork.

The Cheekwood Botanical Garden and Museum of Art (1200 Forest Park Dr) was once a private home and estate of the Cheek family, but it now houses a cultural center complex on 55 acres. The site includes a museum with a permanent collection of 19th- and 20th-century American art and a Botanic Hall with an atrium of tropical flora and changing plant exhibits.

Think globally at the Hartzler-Towner Cultural Museum at Scarritt Bennett Center (1104 19th Ave S), where selected masks, textile designs, and pottery are on view in the Laskey Building. The collection consists of several thousand objects from around the world and other artifacts pertaining to different ethnicities and cultures.

For religious art, there's a wooden 8-foot-by-17-foot carving of "The Last Supper" based on Leonardo da Vinci's masterpiece at The Upper Room Chapel (1908 Grand Ave) along with a striking 9,000-mosaic stained glass World Christian Fellowship Window. The museum at the Upper Room also has outstanding religious works, besides two annual displays of nearly 70 Ukrainian Easter eggs in April and more than 100 Nativity scenes in December.

The Vanderbilt University Fine Arts Gallery (West End and 21st Ave S) showcases six exhibitions each year that represent Eastern and Western art and an international collection of works. A portion of the gallery space is frequently dedicated to the exhibition of selected works from the permanent collection.

The Tennessee Performing Arts Center (505 Deaderick St) is the first state-funded facility of its kind in the nation and is home to the Nashville Ballet, the Nashville Opera Association, and the Tennessee Repertory Theatre. The arts center occupies an entire city block, and its venues include Andrew Jackson Hall (2,472 seats), the James Polk Theater (1,075 seats), the Andrew Jackson Theater (256 seats), and the War Memorial Auditorium (1,661 seats).

Nashville is home to country music, but it also features the Nashville Symphony Orchestra at Schermerhorn Symphony Center (One Symphony Place). The center, which is named in honor of Kenneth Schermerhorn, the orchestra's late music director and conductor, also houses the Laura Turner Concert Hall.

Visitors to Nashville will have a hard time missing such architectural standouts as the Parthenon. Find out about all the can't-miss landmarks on the next page.