Getting In, Getting Around Nashville 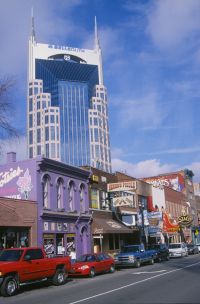 ©2006 Barry M. Winkler Plan your sightseeing around Nashville's rush hours so that the streets are clear for you.

Be sure to carry a map with you while touring Nashville, and try to take advantage of the city's reasonably priced public transportation system. The following Nashivlle transporation primer should get you going in the right direction.

Rental car: A car is essential for getting around Nashville, and you can rent yours onsite at the Nashville International Airport. Eight major car rental companies have check-in desks located on Level 1 of the airport. The rental cars are conveniently located in a covered area adjacent to the terminal building.

Taxis: Taxis will be waiting for you in a designated area for ground transportation (follow the signs). From the airport, the meter starts at $4.50 and the rate is $2 per mile. A flat rate of $22 is charged to take a passenger to downtown Nashville and the Mobil Three-Star Opryland Hotel area. Be aware that there's an extra charge for large bags.

Public transportation: For early birds, the Gray Line Airport Express departs from the Nashville International Airport every 15 to 20 minutes beginning at 5 am and runs until 11 pm. The one-way fee is $12, with frequent stops, while a round-trip costs $22. You can board the express at the lower level of the airport's ground transportation area.

The Nashville Metro Transit Authority Bus Route 18 makes nine trips each weekday between downtown Nashville and the airport, and four times daily on Saturday and Sunday. A one-way fare costs $1.25. The Route 18 schedule is available at the airport's Welcome Center, located on the baggage claim level.

Rush hour: Nashville is a relatively easy city to drive in for visitors. Yet, construction is always going on somewhere, which is Rule No.1 to know before taking the on-ramps to Interstates 40, 24, and 65. The work is often postponed until late at night or even suspended during major holidays.

You should know that Interstates 65, 40, and 24 intersect, making Tennessee one of only six states in which three such thoroughfares converge. So that also brings more wayfarers into Nashville.

Study the Nashville map carefully so you'll know which exits to get off at once you see vehicles backing up on the freeways. And if you stay in the middle lanes, you can make faster decisions around the trickiest Interstate 40 and Interstate 65 splits around Broadway, Second Avenue, and Demonbreun and along the Interstate 440 and Interstate 840 beltways.

Jamming takes on new meaning in Nashville at rush hours, which usually are from 7 am to 9 am and 4 pm to 6 pm Monday through Friday. Arrange your itinerary so you won't be on the interstates during those times, and you won't be stuck in bumper-to-bumper traffic.

Rules of the road: Nashville's roads haven't kept pace with the town's expansion and might be difficult to navigate if you aren't familiar with them. Out-of-town drivers should be aware that most downtown streets are one way and some signs are poorly posted. Some streets simply stop and others change their names abruptly. Right turns on red lights are legal, unless a sign says otherwise.

Many of the special parking meter lanes in downtown Nashville have no or restricted parking during rush hours, and cars left there during these times will be towed away. Instead, park in the 24-hour public parking garage at the junction of First Street South and Broadway.

(MTA), which operates bus services in the greater Nashville area. An all-day pass is $3.75 for passengers 20 and older, which is a bargain compared to the $1.25 one-way fare. Single tickets for youth (19 to 5 years old) cost 70 cents; senior citizens (age 65 and older) and the disabled pay 60 cents. If you're staying a week in Music City, then go for the $17 seven-day pass. MTA even has bike racks on the front of its vehicles, which are complimentary.

During football season, from August to December, MTA has an "End-Zone Express" for $6 for the roundtrip on game days from the Yellow Route (departs from 4th Ave N and Harrison St) and Green Route (534 Chestnut St from Greer Stadium) satellite parking lots for the Tennessee Titans.

Downtown Nashville is quite small and easily managed on foot. Bike riding is another option for getting around Nashville. The city has many parks popular for cycling, and it's a common sight to see groups of cyclists riding around. The Shelby Street Pedestrian Bridge offers a wonderful scenic view of downtown Nashville and the Cumberland River and is open to pedestrians and cyclists every day from sunrise to sunset.

You can rent road or mountain bikes at Cumberland Transit (2807 West End Ave, 615-321-4069) near Centennial Park, and the business will also give you maps of bike trails in the area.

Now that you know how to get around Nashville, you can start thinking about taking advantage of all there is to do. Nashville's major attractions include the Country Music Hall of Fame and Museum, the Parthenon, the Belle Meade Plantation, and more. See the next page for our suggestions on experiencing Nashville's special events and attractions.