by Patricia Bates
NEXT PAGE 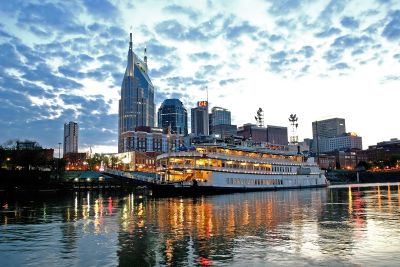 ©2006 Heavenly Perspectives Nashville is a big city, but it has a welcoming, small-town feel. See more pictures of city skylines.

Nashville is where artists find their muse, where inspiration strikes and creativity thrives. You can feel that expression in this "Athens of the South" in the orchestral movements at the new Schermerhorn Symphony Center or in the rhythm of the clarinet of late at the Musicians Hall of Fame and Museum.

If perfect harmony can be achieved anywhere, Nashville has come nearest to it over the last 200 years. A tradition began in 1811 when a fiddler and buck dancer, Davy Crockett, came to middle Tennessee. And it never stopped: The folk ensemble Fisk Jubilee Singers began touring in 1871, gospel hymns were sung at the Ryman Auditorium by 1892, and country's Grand Ole Opry started broadcasting in 1925.

Today, the "Nashville Sound" is heard all over the world, but it can't be defined by its lyrics or melodies anymore. As a $2-billion-a-year business, it's still about captivating them all. It's the visitors to Music City USA who are among its most loyal audience. That's the genius behind Nashville.

Insider's Guide: The Best Of Nashville

Both classical and country, Nashville is as uptown as a Stradivarius violin and as down-home as a Martin guitar. It's where architecture is as rustic as a log cabin at Fort Nashborough or as modern as the Grand Ole Opry House. It's where the famous are more likely to wear baseball caps and sneakers than ten-gallon hats and boots.

Nashville is a big city that feels like a small community, where executives on Music Row form partnerships to the legislators working hard on Capitol Hill. It's where joint names are made in industries such as publishing, medicine, or automobile sales.

It's also where vacations are mostly shared experiences, whether it's a family reunion or a girlfriend's getaway. Whatever the collaboration, there are some not-to-be-missed attractions in Nashville: the Ryman Auditorium, the winter home of the Grand Ole Opry; The Hermitage, the mansion where President Andrew Jackson once lived; the Parthenon, a reproduction of the one in Greece; and the Country Music Hall of Fame & Museum, where the music's finest are inducted and celebrated.

Together, Nashville has all the makings of a destination where there's something for everyone: professional sports like the Tennessee Titans of the National Football League (NFL) to the Nashville Predators of the National Hockey League (NHL); museums such as the Frist Center for the Visual Arts and Fisk University's Car Van Vechten Gallery; retailers like Tiffany & Co. and Louis Vuitton; famous restaurants and bars such as the Loveless Cafe and the Bluebird Cafe;, and historic landmarks like the Belle Meade Plantation and the Travellers Rest Plantation and Museum.

Geography and landscape: When you think of urban sprawl, it isn't usually associated with Nashville. Yet with 533 square miles, it has the second-highest land mass of a major metro area in America. So if you want to cover more ground, you'll definitely need dependable transportation.

Nashville is mostly flat, with its smallest grade at 550 feet and the tallest at 1,100 feet around the rim of the basin. That makes it a comfortable walking city, especially around Broadway and First Avenue through about Eighth Avenue. You'll need your energy, though, going up and down Capitol Hill.

The low-lying Cumberland River also winds through Nashville like its fourth major Interstate. Since the earliest settlers arrived on Christmas Day 1779 on flatboats, it has been navigated by barges to the Delta Queen paddle wheeler. For recreation, there are two nearby manmade lakes --- Old Hickory and Percy Priest --- as well as the reservoir of Radnor Lake.

General orientation: It's important to remember that the Cumberland River is virtually to the east, along with its five bridges. Be aware that the downtown grid system isn't the best to follow because some streets simply stop while others change their names abruptly. Most downtown streets are one way. Play it safe and carry a map with you.

The newest is the Gateway Bridge, which leads to the Coliseum and the home turf of the NFL team the Tennessee Titans. The other markers to help you navigate are the Shelby Street Pedestrian Bridge, the Woodland Street Bridge, the Victory Memorial Bridge, and the Jefferson Street Bridge.

Broadway is the main thoroughfare in Nashville, which takes you east from the circle of flags and dead-ends at Riverfront Park, alongside the Cumberland River where it forks left into 21st Avenue/Hillsboro Pike and right into West End Avenue/Harding Road. Many of the side streets intersect with at least one of these avenues.

Safety: Maybe it's Southern hospitality, but Nashville was ranked as the friendliest city in the United States in 2004. Yet, that doesn't mean that visitors shouldn't follow basic safety precautions.

Nashvillians are more than willing to give directions when asked or offer to lend a hand when someone is in trouble. They are mostly good neighbors, but you don't want to take chances late at night beyond the restaurant district in East Nashville and farther than Germantown in North Nashville.

As in anywhere, tourists must always think "safety first." Keep doors and windows locked in hotels and automobiles and valuables out of the reach of petty criminals. Nashville's officers are usually out in force around Broadway, near the hangouts and where most major events are held.

Spring is when Nashville is at its greenest and bluest, with the lush lawns of Centennial Park abloom with daffodils, irises (the official state flower), and tulips under clear skies. It's also when sudden rain showers appear, though, so bring an umbrella or hooded jacket, especially for those weeks.

Many are just pop-up clouds, but others can become violent downpours. And, it can also be tornado time, when you should heed the warnings of the TV meteorologists and the loud warning sirens. Never attempt to ride out tornadoes or other stormy weather.

Autumn is a great time for watching the leaves change colors, from garnet reds to topaz-like gold, and for rummaging through pumpkin patches from Franklin to Lebanon. There might be enough of a chill in the air to wear a sweater at night, but it's only breezy by day.

©2006 Gary Layda Autumn in Nashville is highlighted by Tennessee Titans football at the Coliseum.

Tourists should pack their lightest and most absorbent clothes for June, July, and August. This is the swelter season in Nashville, when the humidity and heat index cause the mercury to rise to up to 95 to 100-plus degrees Fahrenheit. If you attend any festivals, make sure to keep a bottle of water, visor, sunscreen, and sunglasses with you.

Winter arrives in January with the first snowfall, which normally only accumulates between one to three inches. Since the temperatures hover around 32 degrees Fahrenheit, it often melts and re-freezes with ice on the roads. At those times, you should drive with extreme caution on side streets. Since Nashville's weather isn't always this predictable, check with the National Weather Service before you head out.

You'll also need to know exactly how to get where you're going before embarking on any tourist excursions. Getting around Nashville is relatively easy, especially if you choose to tour the city on foot. See the next section for more tips on navigating Nashville.