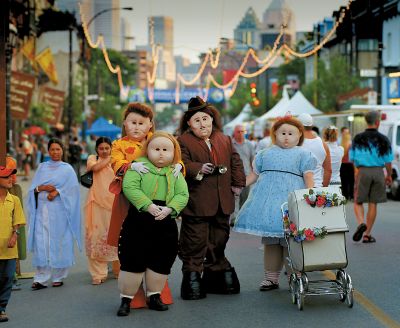 ©2006 Tourisme Montreal/Stephan Poulin Get a good chuckle at the Just for Laughs Festival in the Latin Quarter.

Museums abound in Montreal. You'll find more than 30 cultural institutions that highlight everything from art to architecture, fossils to film history. To top it all off, the last Sunday in May is Montreal Museums Day, where all of these fine institutions open their doors for free, complete with free bus transportation. The vibrant Montreal theatre scene offers original options in both English and French.

Insider's Guide: The Best of Arts & Culture in Montreal

In the heart of downtown, Place des Arts (175 rue Saint Catherine St W) is a five-theatre complex with plans for a sixth that will be a new home for the Montreal Symphony Orchestra. The complex is also home to the innovative Les Grands Ballets Canadiens dance company, the Montreal Opera, and the Broadway musical touring company. Other entertainment hosted here includes chamber music, recitals, folk singers, variety shows, musicals, and classical and modern dance.

The Montreal Museum of Fine Arts (1379-80 Sherbrooke St W) is Canada's oldest art museum (founded in 1860) and has a wide variety of displays ranging from Egyptian statues to 20th-century abstracts. It's wonderfully inspiring collections include decorative, Canadian, and European arts as well as ancient artifacts and Mediterranean antiquities.

There's always a unique temporary exhibition, too, which in the past has paid tribute to artists from Magritte to Matisse; Keith Haring to Alfred Hitchcock. A visit to the permanent collection is free.

Musee d'Art Contemporian de Montreal (185 Saint Catherine St W) is the only museum in Canada devoted exclusively to modern art. Sixty percent of the permanent collection of 6,000 works is composed of Quebec artists. You'll also find international painters like Jean Dubuffet and Jean Arp and photographers like Ansel Adams. No single style prevails, so expect to see a wide range of works, including video displays and Abstract Expressionism.

Specialized museums in the Latin Quarter neighborhood include Cinematheque Quebecoise (335 de Maisonneuve St E), a wonderful archive of the world of television and films with unique exhibits that explore everything from foreign movie posters to vintage television sets. Best of all -- it's free.

Just across the street, Centre de Design of the University of Quebec at Montreal (1440 Sanguinet St) has a free small gallery space that's often full of design surprises. It's open when school is in session.

The Just for Laughs Museum (2111 Saint Laurent Blvd), another Latin Quarter staple, offers the International Comedy Hall of Fame and Immortals of Comedy, hundreds of film clips from your favorite comedians.

A few museums, while a bit off-the-beaten path, are still worth the trip. Twenty minutes south of Montreal you'll find Exporail, the Canadian Railway Museum (110 Saint Pierre St in Saint Constant on Montreal's South Shore), home to some 150 Canadian locomotives, passenger cars, freight cars, and streetcars. The museum is adoringly and painstakingly preserved and cared for by the 900-member Canadian Railroad Historical Association, a passionate and sincere bunch who find the beauty in both the machinery and the heritage, and aren't afraid to share the sentiment. They can rattle off train make and model numbers like they know their grandkids' birthdays.

The collection includes a completely restored Sydney & Louisburg car from the Maritimes, once used by wireless inventor Guglielmo Marconi; a Fairbanks-Morse Trainmaster powered by submarine engines left over from World War II; and a traveling school car complete with classroom, desks, and living quarters for the teacher. The museum's new pavilion opened in 2004.

Archeo-Quebec is a unique concept that invites avid and amateur archeologists alike to get down and dirty by celebrating Quebec Archeology Month every August. Some 100 workshops and activities let you observe actual archeological digs and speak with archeologists in the field at 50 museums and sites throughout all corners of Quebec, many in the Montreal region.

The various landmarks in Montreal include many beautiful religious buildings. Learn about Montreal's landmarks and architecture on the next page.