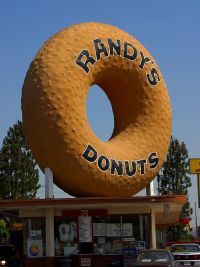 Despite all those ugly strip malls, Los Angeles is an architectural gold mine. With films and TV shows shooting daily in the city's streets, LA has always been open to making its urban landscape more interesting. And it doesn't hurt that there are a whole lot of people with serious cash to throw at the design of their homes.

Los Angeles is all over the map architecturally, which makes it a very fun place for architecture and design fans to explore. You can spot Mission-style homes, Art Deco theaters, high-rises downtown, mid-century modern homes in the hills, and huge post-modern architectural icons like the Getty Center and the Walt Disney Concert Hall.

Insider's Guide: The Best of Architecture & Landmarks in Los Angeles

Insider's Guide: The Best of Architecture & Landmarks in Los Angeles

In typical LA fashion, just around the corner from El Pueblo are some of the city's well-known examples of Art Deco architecture -- the movie palaces of Broadway, including the classic Orpheum Theater (842 S Broadway). And of course, just a few blocks away is the new Frank Gehry-designed Walt Disney Concert Center (111 South Grand Ave), a building that managed to satisfy its seemingly unreachable expectations.

Several homes in LA are architectural landmarks, including gems designed by Frank Lloyd Wright, Richard Neutra, Eero Saarinen, and R.M. Schindler. The MAK Center for Art and Architecture (835 N Kings Rd, West Hollywood) is housed in the home Schindler designed for himself, making it a great place to start getting acquainted with modern LA architecture. There are also a handful of tour companies that run architectural tours of Los Angeles, including tours of the classic Neutra, Geary, Wright, et al homes.

Avila Adobe (10 Olvera St) is the oldest existing house in Los Angeles. The home, built in 1820, was damaged in an earthquake in 1971, then restored to become an example to honor Los Angeles' Hispanic heritage. Having been built in 1884, The Old Plaza Firehouse (134 Paseo de la Plaza) was the city's first firehouse and has recently been restored and turned into a museum of photographs and firefighting equipment from the 19th century.

Of course, you can't visit Los Angeles without a trip to Rodeo Drive. Keep reading to learn more about LA's upscale shopping scene.