Getting In, Getting Around Las Vegas 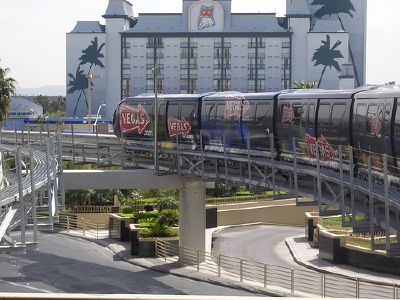 ©2006 Steve Vance The Las Vegas Monorail has had some technical difficulties, but it can be a great way to get around The Strip.

Las Vegas transportation is plentiful. Use the following tips to help you get around this rollicking city.

Located on the southern end of The Strip, McCarran International Airport is an ultramodern facility that even provides slot and video poker machines. But don't expect to hear the satisfying clank of coins as they fall from a winning machine. The airport has paperless slots, in which you give your money to a cashier and she gives you a slip of paper to slide, quietly, into the machine.

If you want to get around town easily, specifically if you plan any excursions off The Strip that aren't taking a guided tour, you'll want to rent a car. Many visitors opt to rent a car for getting away to scenic spots outside of town. Don't worry about where to park because all of the hotels have rental car parking areas.

Taxi: A lengthy taxi stand is located just outside the east side of the airport baggage claim area, outside Exits 1 through 5. Airport personnel are available on the taxi curb to help you flag one. Be aware that you will be charged $1.20 on all fares that originate at the airport.

This flat fee is in addition to whatever you choose to tip the driver, which is generally $1 to $2 for a fare below $10. If the fare is higher, which is possible in this spread-out town, and if the driver is friendly and helps with your luggage, you might end up paying a 15 to 20 percent tip.

Before you duck into a cab, keep in mind that the amount of passengers is limited to a maximum of five people.

Public transportation: You can catch a shuttle at the north and west sides of the baggage claim areas, just outside door Exits 8 to 14. Bell Trans and Grayline/Coach (702-739-5700) are the two most popular, but there are five companies that service the Las Vegas area. Shuttle service between the airport and The Strip costs about $4 per person and about $5 per person for a ride between the airport and downtown Las Vegas. Shuttles operate 24/7 in this nonstop town, and they are the best option because it's closer to the baggage claim area and the drivers are helpful with luggage and tourist information. Also, the shuttles often provide magazines with coupons and up-to-date information on headliners and attractions in Las Vegas.

Another option is using the Citizens Area Transit Bus System located on the ground level at McCarran. A one-way fare on Route 301 to The Strip will cost $2; a one-way fare off-strip on other routes will cost $1.25. A total of 49 bus routes are available to take you throughout the Las Vegas and surrounding areas, so check with the Citizens Area Transit System (702-228-7433) for the latest schedules.

Rush hour: With tremendous growth occurring in Las Vegas, out-of-towners should be aware that rush hours can be hectic. Rush hours are typically between 6:30 am and 10 am and 3 pm and 6:30 pm. During those designated times, Interstate 15 and US 95 become clogged with commuters traveling from east and west and north to south. And the Rainbow Curve, the area of US 95 between Lake Mead and Jones Boulevards running both north and south, becomes a virtual parking lot, as does the Spaghetti Bowl, where Interstate 15 and US 95 cross.

Rules of the road: Las Vegas is built on a grid, so if you happen to get a bit lost, continue to take rights or lefts and you'll wind up where you started.

While driving in Las Vegas, watch out for the cab drivers. They're notorious for quickly cutting in front of you or flying across three lanes to turn left from the far right turn lane.

Many visiting drivers don't understand that you can turn right on red (unless otherwise stated). Locals will be quick to remind you of this with a long, healthy honk if you hesitate.

Public transportation, fares: The Citizens Area Transit Bus System has routes running along The Strip 24 hours, but be careful if you venture to other areas like downtown, where you can only catch a bus from 5:30 am until 1:30 am. You don't want to get stranded far from your hotel room and end up paying $40 for a taxi to drive you back. The one-way bus fare on The Strip is $2 per ride; $1.25 in other areas like downtown. Exact fare is always required.

The Las Vegas Strip Trolley is a convenient way to travel Las Vegas Boulevard from 9:30 am to 1:30 am daily. The trolley's North Loop serves the major Strip hotels and the South Loop, then makes its way to the South Coast Hotel & Casino and Las Vegas Outlet Center, among other stops. The cost is $2.50 per ride, and exact fare is required.

The Deuce is a double-decker bus that services Las Vegas Boulevard. You can choose between 53 upper deck seats and 27 lower deck seats. A one-way fare is $2 or you can buy an all-day pass for $5.

The Las Vegas Monorail runs along the east side of The Strip between the Mobil Three-Star MGM Grand and the Mobil Two-Star Sahara hotels. This is a relatively new addition to Las Vegas, and it has yet to work out all the kinks. The Monorail has broken down a few times with travelers on board who must wait for it to get fixed or get off the tracks. The price is $5 for a one-way ticket, $9 for a two-way ticket, and $40 for a three-day pass.

Taxis, on foot, or by bike: Basic taxi fare is $3 for the first mile, $1.80 for each additional mile, and $.35 a minute while stopped at a red light. Taxis can only hold up to five passengers.

Watch out for cab drivers that might try to take you the long way around the city to get to your hotel. McCarran Airport is nestled against the south end of The Strip and most hotels are not more than a $20 cab ride away.

If you plan to hoof it in Las Vegas, join the crowd. Winter, fall, and spring months are perfect for walking from hotel to hotel. The hotels are set up to get you in their establishment, so you won't have to wander far. They want to make it as easy as possible to come in and spend money, which is why they spent lots of money on elevated walkways that carry you over the major intersections along The Strip.

If you're interested in bike riding to your destination, you'll quickly discover this isn't a bike-friendly town. You can rent bikes, mopeds, Segways, and scooters on The Strip, but with the clogged sidewalks and fast-moving cabs, these aren't very popular modes of transportation. And there aren't many bike racks to hold the items when you're sidetracked by the next big attraction you stumble across. In fact, the only bikes you'll see on The Strip belong to the Las Vegas Metro Police on patrol.

Although there are bike lanes in many residential neighborhoods, most serious bike riders get out of town to the picturesque, and cooler, mountain areas with maintained bike lanes.

Obviously, if you're up for gambling and taking in a show, you've come to the right place. But Las Vegas offers much more than casinos and shows -- if you're interested, you can find such unique spots as the Atomic Testing Museum and the Botanical Cactus Garden. See the next page for information on the many special events and attractions in Las Vegas.