Life Along the Congo River 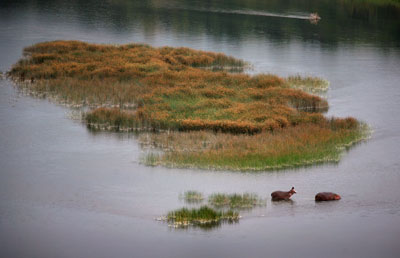 Hippopotami in the Congo are becoming increasingly threatened by poachers. These two don't look too concerned as they wade in the water.
John Moore/Getty Images

The Congo River is a lively -- and menacing -- menagerie. The river and rainforest are home to nearly 400 mammal species, 1,000 types of birds and more than 10,000 varieties of flora [source: WWF]. Forests are breeding grounds for reptiles like lizards and snakes. Crocodiles, birds and hippopotami prefer the Congo's many lakes, and along the riverbanks, you'll find cats like leopards and lions, as well as hyenas, and rhinoceroses. Dolphins and whales are sometimes seen at the river basin. For prime animal sightseeing, steer your pirogue into a bais, or a sun-dappled clearing in the densely forested land that borders the river. A bais is an oasis of light into which even elusive wild animals (like the western lowland gorilla) are drawn.

Animal sounds may provide a pleasant soundtrack as you cruise down the Congo, but you'll need to be abreast of their whereabouts when the sun sets -- typically around 6 p.m. In the dark, a hefty hippo can threaten your watercraft as much as a jagged river rock. Another nearly invisible animal joins the chorus after Nature calls lights-out: the mosquito. All of these animals are proprietary and guard the river. Some eyeball trespassers for a tasty morsel, but none patrol the Congo as carefully as the native Congolese who live along the riverbanks.

The Congolese have grown wary of outsiders -- they have plenty of reasons to distrust Western intruders, or the mondelé. At least one region along the Congo River -- Ile Sumba -- has been dubbed the abattoir, or slaughterhouse. Cannibals from the Engombe tribe live nearby and have been known to abduct and kill explorers.

The nation's population is about 65 million [source: World Almanac]. This includes more than 200 ethnic groups, the largest of which is Bantu. While no one's exactly sure how these people came to live in the Congo, anthropologists think the current population descends from pygmies, who were later joined by the Bantu (who migrated from the east) and the Nilotic (from the north). Only 32 percent of the population is concentrated in urban areas, and the majority live in rural areas. Few Congolese live in the most interior forests.

In the Congo, the river isn't just a geographical monument that people visit during summer break or attempt to navigate in a feat of superhuman strength. It's a necessary, everyday part of life for trade and travel. The Congo is like the Route 66 of Africa, a way to get from point A to point B. And unlike nations that struggle over rights to water sources, the Congolese use the Congo River cooperatively, just as city dwellers share highways.

The issue that plagues the Congolese is development. As colonial explorers observed centuries ago, the natives weren't interested in building cities and making use of all their resources -- they didn't even know how valuable things like ivory and rubber were to the Western world. Ultimately, this set them up for exploitation on a massive scale. Learn about the Congo's struggle with colonialism on the next page.