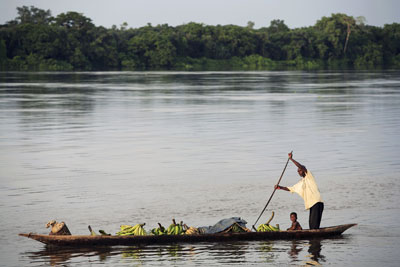 A Congolese man and his son sail in a pirogue along the Congo River, just outside the town of Lisala. He lives in a small village and sells bananas and vegetables to other sailors on the river. Check out safari pictures for more African scenery.
Per-Anders Pettersson/Getty Images

Joseph Conrad's 1902 novella "Heart of Darkness" created a pretty disturbing impression of Africa's Congo. "Congo" refers to many aspects of that densely forested, alluring land. The name signifies the nation, the jungle and the river. Since the Congo's first European explorers -- the Portuguese, led by Diogo Cão -- the river has beckoned to imaginations and mercenary spirits around the world. And now, the river, forsaken by colonialism and shouldering rusty, Industrial Age steamers on its banks, is a sought-after resource in the face of environmental adversity. It wields more hydroelectric power potential than almost any other river in the world.

This time, the possibility of tapping into the Congo River's hydroelectric potential is to pull the Congolese out of darkness -- literally. Some advocate groups substantiate that this goal is just as mercenary as the conquests of past centuries. When the river was newly discovered, vast resources like rubber, gold and ivory appealed to greedy Europeans who wanted to build up their own treasuries. And much of these resources, discounted as inconsequential by the indigenous people, were extracted from the nation with no recompense for its inhabitants. What's more, the people were enslaved to produce wealth for foreign nations.

People say that the river is murky brown, but for centuries now, historians have written about the Congo's bloody waters. From cannibalism to colonialism, and from modern political strife to the fearsome creatures that await their prey along the river, fantastic tales of death and near misses have corroborated the Congo's reputation as the heart of darkness.

Settle into your pirogue, and we'll journey up the river and through the annals of Congolese history. But what exactly is a pirogue? And where does our adventure begin? With the watery terrain of the river itself, naturally. Read about the geography of the Congo River on the next page.