by Linda Bryant
Prev NEXT
3 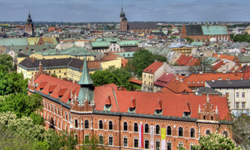 Krakow can be an affordable trip for film buffs, who may want to see more of the history behind "Schindler's List," which was filmed in the Polish city.
Hemera/Thinkstock

Steven Spielberg's gripping Holocaust drama "Schindler's List" won seven Academy Awards and exposed millions of movie goers to the true story of Oskar Schindler. The selfish businessman, portrayed by Liam Neeson in the 1993 film, becomes an unlikely hero when he turns his vodka factory into a safe haven for Jews during World War II. The movie shows hope and redemption are possible, even during one of the darkest periods in history.

"Schindler's List" had a huge impact on movie tour industry in Krakow, opening up avenues for tourism based in Jewish history and heritage [source: Silverman]. Many "Schindler's List"-inspired tours are available in Krakow. Some focus on Kazimierz, the city's former Jewish district where much of the movie was filmed, and Podgórze, where Schindler's vodka factory still stands. The factory, which has been turned into a historical museum, is considered a must-see because of its profound educational value. Some organized tours widen the scope of Schindler's history lesson by including a side trip to the Auschwitz concentration camp.

Making a pilgrimage to Krakow is relatively inexpensive, especially in the off season. Visitors often discover that the city has more to offer than a sobering history lesson. In fact, Oskar Schindler would likely approve of Krakow's modern-day personality. It's a gorgeous, bustling city with a thriving cultural arts scene.