by Linda Bryant
Prev NEXT
4 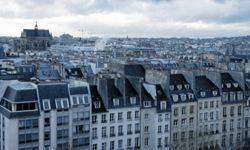 When Paris takes center stage in a film, it often commands as much attention as the storyline and actors. The city's cinematic history is laden with memorable movies -- from Jean-Luc Godard's French language masterpiece "Breathless" to the classic Audrey Hepburn and Cary Grant romance "Charade." Although the City of Light's film identity is steeped in history, it's also a modern day film lover's paradise. Here are some suggestions for movie tours of Paris that focus on very recent films:

Fans of "La Vie En Rose," the 2007 biographical drama about French singer Edith Piaf, can go it alone or take a guided tour of Paris through Piaf's eyes. Highlights include the Belleville district, where Piaf spent her early years, and the Paris Olympia Concert Hall, where the troubled songbird performed.

The beloved 2001 French movie hit, "Amelie," takes place almost entirely in the Montmartre neighborhood of Paris. Fans of the movie love the adventure of discovering the Café des Deux, the slightly hard-to-find café where Amelie worked as a waitress [source: Waymaking.com]. There are numerous walking tours available in the district.

"The DaVinci Code," the 2006 religious mystery adapted from Dan Brown's massive bestseller, sparked a new wave of movie tour-based business in Paris. Fans of the book and movie, often very passionate about every detail of the story, can retrace Robert Langdon's footsteps. There are professional guides in Paris prepared to give detailed walking tours based on the movie, scene by scene, clue by clue.