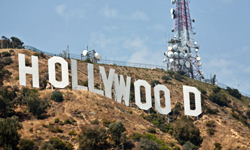 Hollywood still dominates the entertainment industry, but other locations are challenging it as the place to shoot new movies. See more pictures of American landmarks.
iStockphoto/Thinkstock

The film industry has changed dramatically since the Golden Age of Hollywood, when the majority of movies and television shows were filmed in Los Angeles. New production centers are emerging all over the world. More than 40 states now offer tax breaks for movie and TV productions [source: Little, Satake]. Filming outside of the United States is also increasingly popular. For example, Woody Allen, known early in his career for filming exclusively in New York, films in Paris, Barcelona and London [source: Itzkoff].

Hollywood is still a major epicenter for film, but it has to compete for the business. According to Film L.A. Inc., a non-profit group trying to lure production back to Los Angeles, on-location filming of feature films, television shows and commercials in Los Angeles shrank 19 percent in 2009 [source: Verrier]. The trend began slowly in the late 1960s, primarily because moviemakers needed ways to cut production costs. By the 1980s, affordable "runaway studios" -- built in places such as Utah, Texas and Tunisia -- were becoming the norm.

Hollywood's loss of film production is a boost to local economies all over the globe, from rural communities to metro areas. Not only does filming on location create jobs and revenue in the short term, it builds long-term economic strength by attracting tourists and film buffs who enjoy visiting places where their favorite movies have been filmed.

Keep reading for details about some of the world's most fascinating filming locations.