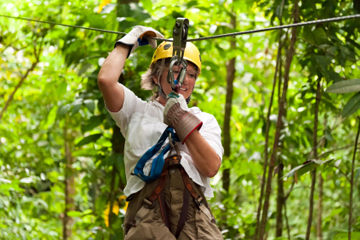 Using the right safety equipment, including a harness and helmet, will help you stay safe when using a zip line.
©iStockphoto.com/pchoui

While most zip lines in the United States that are regulated by the PRCA or ACCT have standardized ratings and training, it doesn't necessarily mean that flying through the air on a wire many, many feet above the ground doesn't present hazards.

One of the first recorded accidents to occur on a zip line was in 1739, when Robert Cadman of Shrewsbury, England, attempted to zip line from the top of St. Mary's Church in Shrewsbury on a rope fastened to a tree, 250 meters (820.2 feet) below. Unfortunately, Cadman's rope broke, and he plunged to his death [source: French].

The recent popularity of zip lines has also caused more attention to be drawn to zip-line accidents. In March 2008, Barbara Sue Fojtasek fell more than 30 feet (9.1 meters) to her death on the Honduran island of Roatan [source: Potter]. Fojtasek was suspended in the air with an instructor when the primary line broke. A guide apparently failed to correctly set up the safety line, which is in place in case of a primary line malfunction.

Also in 2008, a seventh-grader in Tennessee died from a zip-line accident after staff members at the church retreat he was attending failed to move a ladder that blocked the line [source: Stambaugh]. Although the boy was wearing a helmet, he sustained a fractured skull and vertebrae, as well as brain and other injuries from the high-speed crash into the ladder.

This accident, which left the boy in a coma for four days before he eventually died, also points out that zip-line accidents aren't merely mechanical in nature. Humans run these operations, and people do make errors in judgment or simple mistakes.