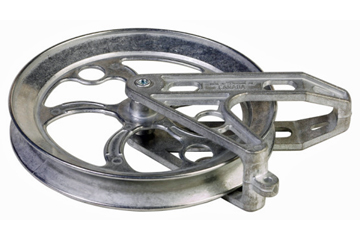 A pulley is a simple machine that makes zip lines possible by cutting down the amount of friction resisting a rider's descent down the rope or cable.
Hemera Technologies/PhotoObjects.net/Thinkstock

Unlike multiple universes or string theory, the physics of zip lines is actually pretty intuitive, if you understand some basic principles.

First is that a zip line needs to descend on a slope. Gravity and inertia dictate that we'll be yanked unceremoniously toward the ground unless an opposing force is acting upon us to stop that motion. So here's a hint: If someone is trying to get you to zip line from, say, the bottom of an empty pool to his or her roof, you can politely decline and smile smugly because you know that just won't work.

So, you've got a line tied at a slope. Now, how the heck do you slide down it fast enough for it to be -- well -- fun? The answer lies in the pulley that attaches to the rope or cable. A pulley is a wheel with a grooved rim known as a sheave, and the wheel turns as it travels along. The advantage of a pulley is that it causes much less friction than pulling your jacket over the wire and trying to slide down, like the action star in our intro. Less friction equals more speed.

Along with the pulley and the line, which will be anchored at two spots, zip lines use some device that lets the rider take advantage of the pulley. This could include a harness or seat that attaches to the pulley by a carabiner, allowing you to travel down the line.

As you're flying down a zip line, reveling in the wonders of gravity, at some point you will no doubt wonder how, exactly, this ride ends. Professionally designed zip lines, thankfully, do have braking mechanisms. Some are active (where the participant or the instructor is manually in charge of the brake), and some are passive (where the "brake" is usually a gentle upward slope at the end of the ride, slowing down the rider and eventually bringing him or her to a stop).

Steve Gustafson, president of the board of directors of the Professional Ropes Course Association and owner of Experience Based Learning (a canopy tour company), says that he recommends zip lines with a passive braking system: "The person with the least experience and least knowledge is the guest. So why put them in control of their descent at 35 miles per hour? You're asking for problems."

In the next section, we'll see who decided that going down a zip line at 35 miles per hour (56.3 kilometers per hour) was a good idea in the first place.