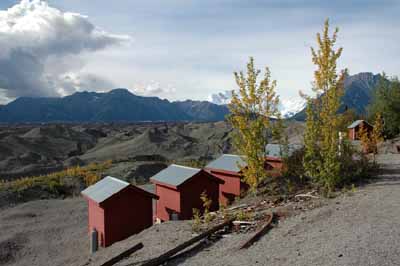 ©2006 National Park Services Scenic driving is one of the better ways to see the sights of Wrangell-St. Elias National Park. The park roads will also lead you to historic ghost towns.

Wrangell-St. Elias National Park, conjoined with the adjacent Kluane National Park in Canada's Yukon Territory, together protect 19 million acres. What was once the exclusive domain of prospectors, trappers, and big-game hunters is now a designated World Heritage Site.

Because of its volcanic past, Wrangell-St. Elias is a landscape rich in valuable minerals, including gold, silver, and copper. In the early part of the century, the Kennicott Mining Company operated a highly productive copper mine near McCarthy, an area that is, ironically, now one of the chief attractions of the park. One of Wrangell-St. Elias's two good unpaved roads leads visitors back in time to the Alaska gold rush days at the turn of the century.

From the ranger station at Chitina on the east side of the park, the road follows the abandoned Copper River and Northwest Railroad for 60 miles to its end. There, a hand-pulled cable tram takes you across the Kennicott River to the tiny community of McCarthy. Now almost deserted, it was once a town of 3,000 miners, hustlers, and card sharks.

From the McCarthy side of the river, where you can rent a bicycle or hire a taxi, another dirt road leads to the ghost town of Kennicott, the site of a 14-story mill that was abandoned in 1938. The mill and other deserted buildings here are covered with ferrous-oxide red paint and trimmed in white. They are among Alaska's finest and most photogenic samples of turn-of-the-century structures. The copper mine at Kennicott, now on the National Register of Historic Places, was once the world's richest.

From visiting these historic mining towns to flying over the massive glaciers and mountain peaks, Wrangell-St. Elias National Park has an incredible amount to see and do for the entire family.