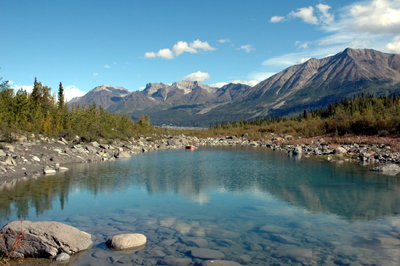 Floating on a raft down one of the many rivers in Wrangell-St. Elias, visitors will see Dall sheep on the tundra and mountain goats on the rocky crags of mountain slopes. But there are so many huge glaciers in this park that there is not very much habitable terrain. The park's largest glacier, Malaspina, is so big that Rhode Island could fit on it.

This rugged region has been called the Himalayas of North America. In fact, the park's terrain may actually be wilder than the great Asian mountains. There are still valleys in these mighty Alaskan mountains where people probably have never set foot, and countless peaks remain unnamed and unscaled. The park is so vast that it contains more unexplored terrain than the Himalayas, largely as a result of the short summers and long winters that come with its proximity to the Arctic.

The size of Wrangell-St. Elias National Park is overwhelming: The biggest national park by far, it is larger than Switzerland and six times the size of Yellowstone. But it is not inaccessible. Two roads lead into the heart of the park. The road from the Chitina River Valley goes to two tiny towns that are remnants of the gold and copper mining frenzy at the turn of the century. Today, these communities are staging areas for hiking, rafting, climbing, and kayaking adventures in the park.

Wrangell-St. Elias is also a place to come and listen to the loon sing hauntingly out on the lake or taste the sweetness of the berry that is the essence of the Alaska outback -- the mountain blueberry.

Wrangell-St. Elias is sure to provide sights you've never seen before. Here are some that you'll want to capture with your camera:

So how did such an awesome park come to be? Check out the next section for a brief history lesson on Wrangell-St. Elias National Park.