Birdmen Through the Years 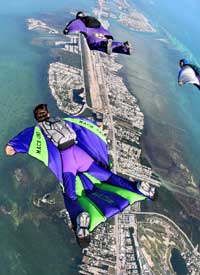 The first parachute jump from an airplane in 1912 followed the Wright brothers' first successful flight by only nine years. Early skydivers were true pioneers, expanding the understanding of freefall aerodynamics with each jump. At the ti­me, they were unable to control direction in freefall -- a skydiving technique known as tracking. They just plummeted until they activated their parachutes.

In the 1930s, test jumpers tried a number of different wing arrangements to provide better tracking -- including wood, canvas and even steel constructions. While these early "birdmen" experienced varying degrees of maneuverability, the clumsy wings often interfered with their ability to properly exit the aircraft or activate their parachutes, resulting in many casualties. Of the 75 original pioneers, 72 birdmen were killed testing new designs and techniques between 1930 and 1961 [source: Hansen]. In response to this high fatality rate, the United States Parachute Association (UAPA) banned the use of wings in skydiving.

During the 1980s, German skydiver Christoph Aarns made progress in wingsuit technology by augmenting his skydiving suit with webbed wing surfaces. While this didn't allow any increased tracking speeds, it did slow his rate of descent and provide stability. In the wake of these advancements, the UAPA lifted its ban on winged skydiving in 1987.

In the mid 1990s, French skydiver Patrick De Gayardon took this concept further, spreading wing surfaces between his legs and under each arm. De Gayardon died while testing this concept, but his three-wing design went on to become the basis for modern wingsuit designs.

The first commercially available wingsuits hit the market in 1998 and the sport has continued to grow in the decades that follow, with two wingsuit manufacturers currently offering a wide range of designs. Wingsuit flying is an extreme sport and one that draws its participants from the ranks of experienced skydivers and BASE jumpers. For this reason, it will likely remain the pursuit of established skydivers and the most adventurous daredevils. But man's desire to fly like a bird isn't fading any time soon, and each year wingsuit flyers can continue to chase world records and push the boundaries of what these suits make possible.

Explore the links below to learn more about aviation and other adventurous ways to take to the sky.

Swiss wingsuit enthusiast Ueli "Sputnik" Gegenschatz currently holds the world record for the longest recorded wingsuit flight. On June 1, 2008, Gegenschatz exited an aircraft at an altitude of 15,000 feet (4,500 meters) and flew 11 miles (17.6 kilometers) over waters off the coast of Ireland at an average speed of 155 mph (250 kph) [source: The Daily Telegraph].