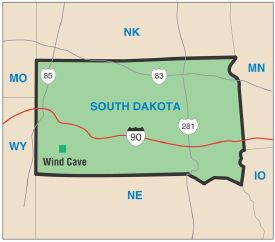 Wind Cave National Park in South Dakota features one of the world's longest and most complex cave systems. Located about 50 miles from Rapid City, South Dakota, the park also has more than 28,000 acres of mixed-grass prairie and ponderosa pine forest.

Cave tours are given daily throughout the year; visitors can get an up-close look at an incredible display of boxwork, a cave formation of thin calcite fins that resembles honeycombs. In addition to exploring the caves, visitors can camp amid the prairie and forest or search for such wildlife as elk and prairie dogs.

Other services: Exhibits and one campground

Buffalo, pronghorn antelope, and mule deer still roam the grassy hills of the Great Plains in South Dakota. Overhead, prairie falcons circle, looking for prey. To the northwest, the eastern flank of the pine-covered Black Hills looms in the distance.

But this tranquil world of prairie grass and sunshine is somewhat deceptive. Below the vast prairie, there is a great underground wonderland, where nature is putting on a spectacular display of geological artisanship.

Wind Cave is one of the largest caverns in the world, a labyrinth of passages carved out of limestone beds that have existed for 60 million years. Unlike many limestone caverns, including Mammoth Cave, that formed at relatively shallow depths -- sometimes less than 100 feet -- Wind Cave twists and turns its way through rock hundreds of feet below the surface. In one place the cavern is more than 600 feet below the surface.

The cave gets its name from the strong air currents that blow alternately in and out of the caverns. The direction of the wind depends on whether the air pressure in the cave is higher or lower than the atmospheric pressure outside.

In a very real sense, the cave is breathing, and this constant rush of air, first in and then out, keeps the interior of the great cavern drier than most other caves. In Wind Cave, you won't hear the eerie sound of endlessly dripping and seeping water.

Because Wind Cave is not as wet as many other caves, there are almost no stalactites and stalagmites. Nature has worked a different kind of underground magic here. Instead of flowing through wide openings and depositing minerals in thick columns, water from the surface seeps through tiny cracks and pores in the limestone. This seepage deposited a thin film, along with tiny droplets, on the walls and ceilings, creating a unique geological spectacle. Stunning multicolored encrustations decorate the walls and ceilings throughout the cavern.

Descriptive names explain the character of these startling works of nature. One kind of formation is called popcorn, a knobby growth that looks like splotches of coral of every size and shape. Another is called frostwork; it varies in size from small strands to large round formations that resemble snowballs.

Wind Cave is probably most famous for what is undoubtedly the world's finest display of boxwork, a calcite formation resembling honeycomb. Boxwork is found everywhere in the cave, but the best examples are in the subterranean chambers called the Post Office, the Temple, and the Pearly Gates.

Take a look at the next section to discover more about what visitors to the park can enjoy.

Highlights: The Post Office and boxwork throughout the cave 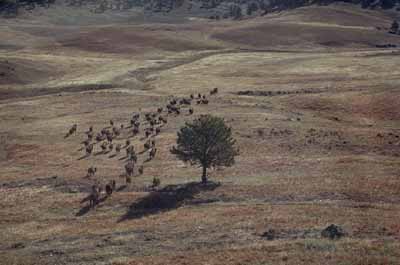 ©2006 National Park Services At one time, 60 million buffalo spread out across the vast open land of the American West. Now, small protected herds, like this one at Wind Cave National Park, are all that exist.

Today unspoiled remnants of the original prairie grassland in Wind Cave National Park are difficult to find. However, the park does offer visitors a living vignette of this once widespread ecosystem. In this small but rich park, wildlife as diverse as black-tailed prairie dogs, coyotes, buffalo, pronghorn antelope, white-tailed deer, elk, western meadowlarks, and sharp-tailed grouse can be found.

Both tall and short prairie grasses blanket the park, which presents a gentle rolling landscape with miles of hiking and horseback riding trails. But underneath the quiet surface of the park is the true attraction: Pahsapa limestone, which has been dissolved and fractured into a cave system with a known length of 80 miles. The caves are unique in that, instead of traditional stalactite and stalagmite growths, there are a series of passages covered with much more fragile crystal formations.

Whether you're interested in detailed shots of Wind Cave's unique formations or want a panoramic shot of the Black Hills, you and your camera will find it all at Wind Cave National Park. Here are a few of the highlights:

In the next section, we'll focus on the formation and exploration of Wind Cave. 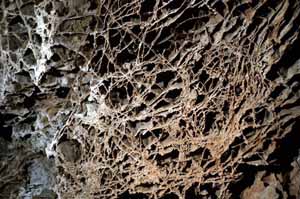