Where can you see the Northern Lights? 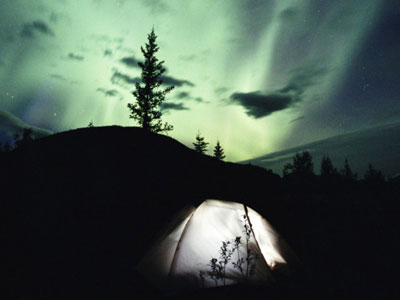 When the Northern Lights appear in the sky, the light display may last from a few minutes to a few hours. The show typically occurs a couple of times a night, with the most activity in the hours around midnight. This is when the widest part of the aurora passes over the northern part of the sky.

Locations around magnetic north are the prime viewing locations for the Northern Lights. This includes Alaska and eastern Canada. In Europe, Iceland, Norway, Finland and Scandinavia are great places to see them as well. Your chances of seeing the Northern Lights decrease the farther away from magnetic north you live. If you live in Alaska, for example, you might be able to see the lights a few times a week. In the northeast United States, you might see them a couple of times a year. If you're located somewhere like Georgia, the Northern Lights may only appear in your night sky once every few decades. Solar activity happens in cycles, heating up to a maximum every 11 years. In 2001, during one of these solar flares, people as far south as Texas enjoyed an aurora borealis light show. The next flare-up will likely take place sometime in 2011, so keep your eyes peeled [source: Dupont].

Unfortunately, there's no guaranteed time or place to see the Northern Lights. Even where the lights can be seen most often, viewing is sometimes impossible due to cloud cover or an overabundance of light. For example, if there are a lot of streetlights, lighted buildings or even a very bright moon near your viewing area, you're probably not going to see much. Here's a rule of thumb -- if it's dark enough for you to see the Milky Way from your location, it's probably dark enough to see the Northern Lights, should they appear in your corner of the sky.