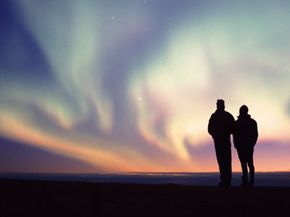 But those explosive light shows are nothing compared to the peaceful and mysterious fireworks display put on by our own Mother Nature.

The dancing, shimmering Northern Lights -- or aurora borealis -- have dazzled humankind as long as we've walked the Earth. Legends and folklore attempt to explain them in just about every culture. Although they occur almost every day, they can only be seen in certain parts of the world, during certain seasons and at certain times of night.

So what are these Northern Lights? We call the lights auroras. Auroras are a natural phenomenon caused by the interaction of solar winds and Earth's magnetic field. Here's how an aurora is formed: The sun burps out cloud of gas, which takes about two or three days to reach Earth. This cloud collides with Earth's magnetic field, causing a chain reaction of energy among the particles in the gas cloud. The energy charges these particles. When they collide with oxygen and nitrogen atoms in Earth's atmosphere, the result is a dazzling light show.

We can only see the auroras in darkness. Auroras do happen during the day, but it's impossible to see them with the naked eye. People sometimes describe auroras as a spectacular sunset or sunrise. Auroras also look like ribbons of color, fiery glows or shimmering waves of light. They can be red, blue, violet or green, depending on the altitude of the gases. The most intriguing thing about them is that they are always different because the atmosphere is ever-changing.

Auroras happen near the polar regions -- magnetic north and south. The magnetic north and south poles attract the charged particles, which is why auroras happen most frequently in a radius around each pole. Auroras also happen in pairs, meaning if there is an aurora at the North Pole, there is a corresponding one at the South Pole. Aurora borealis are Northern Lights, and aurora australis are Southern Lights. This article focuses on the Northern version.

Where can you get a glimpse of nature's light show?

Where can you see the Northern Lights? 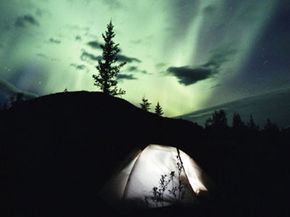 When the Northern Lights appear in the sky, the light display may last from a few minutes to a few hours. The show typically occurs a couple of times a night, with the most activity in the hours around midnight. This is when the widest part of the aurora passes over the northern part of the sky.

Locations around magnetic north are the prime viewing locations for the Northern Lights. This includes Alaska and eastern Canada. In Europe, Iceland, Norway, Finland and Scandinavia are great places to see them as well. Your chances of seeing the Northern Lights decrease the farther away from magnetic north you live. If you live in Alaska, for example, you might be able to see the lights a few times a week. In the northeast United States, you might see them a couple of times a year. If you're located somewhere like Georgia, the Northern Lights may only appear in your night sky once every few decades. Solar activity happens in cycles, heating up to a maximum every 11 years. In 2001, during one of these solar flares, people as far south as Texas enjoyed an aurora borealis light show. The next flare-up will likely take place sometime in 2011, so keep your eyes peeled [source: Dupont].

Unfortunately, there's no guaranteed time or place to see the Northern Lights. Even where the lights can be seen most often, viewing is sometimes impossible due to cloud cover or an overabundance of light. For example, if there are a lot of streetlights, lighted buildings or even a very bright moon near your viewing area, you're probably not going to see much. Here's a rule of thumb -- if it's dark enough for you to see the Milky Way from your location, it's probably dark enough to see the Northern Lights, should they appear in your corner of the sky.

Planning for the Northern Lights Show

It's a­lso important to remember that the area around the North Pole, which is one of the best viewing spots for the Northern Lights, is also an area that enjoys continuous daylight for up to six months. This happens between April and September, and it makes it impossible to see the Northern Lights.

The best way to see the Northern Lights is to make a plan. Because there are so many variables involved, use all the knowledge at your disposal. Lucky for you, the Geophysical Institute at the University of Alaska Fairbanks created the Auroral Forecast Page. Located on the Web, it shows up-to-the-minute satellite information on your chances of seeing the Northern Lights. You can choose your area -- North America, Alaska, Europe, north polar, south polar -- and the site will let you know the probability of visibility on a scale of zero to nine, with nine being the greatest chances. The forecasts are short-term, but the site also provides information on making long-term predictions (up to a month in advance). Of course, there are no guarantees.

Many people plan vacations around catching a glimpse of the Northern Lights. On the next page, we'll talk about some of the more interesting ways to see these colorful lights in the sky.

See the Lights Without Leaving Home!

If you're not able to travel to see the aurora borealis, don't fret. Soon, you'll be able to see the Northern Lights via the Internet. The Canadian Space Agency is setting up a special webcam to capture images of the Northern Lights and upload them to a Web site. The project is called AuroraMAX and is set to launch in the fall of 2009.

If you­'re going to make a special trip to see the Northern Lights, your best bets are either the month of September or the month of March. Earth's orbit is in a maximum of solar activity at these times of year. Earth's orbit reaches a high heliographic latitude, where solar wind speed is higher -- hence more activity. During a 55-year period of observation, scientists found that auroras occur most frequently in September and March [source: Swanson]. These months are also relatively mild in temperature -- sure, you can see the lights really well in the winter, but do you want to do it in temperatures of minus 40 degrees Fahrenheit (minus 40 degrees Celsius)? The months in which you're least likely to catch the Northern Lights are January and July, so don't make aurora borealis travel plans then.

Where there's a demand for Northern Lights viewing, there's somebody trying to sell you the experience. For example, a Fairbanks, Alaska, cabin advertises its establishment as a spot to view the light show -- with large windows facing north and lots of hot chocolate to drink [source: Aurora Borealis Lodge]. In Sweden, you can take a chairlift ride up a mountain to a campsite where you have an open view of the skies. If you happen to fall asleep when the light show begins, a guide will even wake you up [source: Aurora Sky Station]. And in Saariselka, Finland, a hotel's glass igloos, each heated and complete with a king-sized bed, kitchen and bathroom, provide you with an panoramic view of the show, assuming the show is on the night you're there [source: The Hotel Kakslauttanen].

You can even scan the skies for the Northern Lights while enjoying a cruise in Norway. Hurtigruten is one of the many cruise lines that will take you through the Arctic Circle during the peak of Northern Lights viewing opportunities.

You can find dozens more aurora borealis viewing experiences online or through a travel agent. You can see the light in the United States, Canada or Europe.

One of the biggest tourist groups that regularly visit the Northern Lights are the Japanese. Why is this? In Japanese culture, it is believed that a baby conceived under the Northern Lights will be born with extraordinary intellect. Locals in the town of Gallivare, Sweden, still tell tales of the time a snowmobile crashed into a romantic -- and distracted -- couple in a sleeping bag under the stars [source: Belcher].

Debra Ronca "How can you get a glimpse of the Northern Lights?" 30 March 2009.
HowStuffWorks.com. <https://adventure.howstuffworks.com/where-to-see-northern-lights.htm> 30 June 2022
Print | Citation 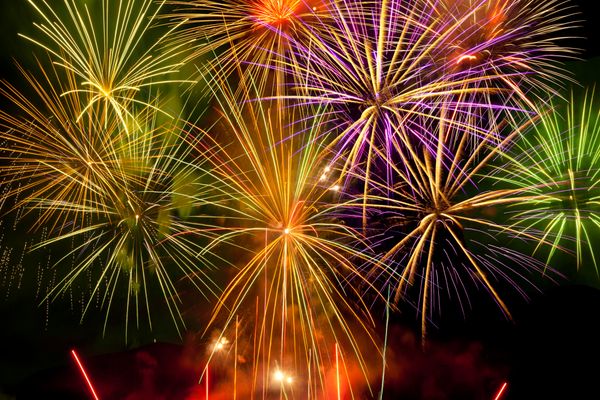