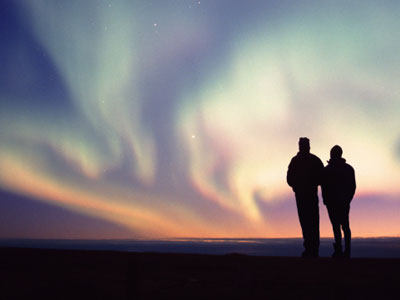 But those explosive light shows are nothing compared to the peaceful and mysterious fireworks display put on by our own Mother Nature.

The dancing, shimmering Northern Lights -- or aurora borealis -- have dazzled humankind as long as we've walked the Earth. Legends and folklore attempt to explain them in just about every culture. Although they occur almost every day, they can only be seen in certain parts of the world, during certain seasons and at certain times of night.

So what are these Northern Lights? We call the lights auroras. Auroras are a natural phenomenon caused by the interaction of solar winds and Earth's magnetic field. Here's how an aurora is formed: The sun burps out cloud of gas, which takes about two or three days to reach Earth. This cloud collides with Earth's magnetic field, causing a chain reaction of energy among the particles in the gas cloud. The energy charges these particles. When they collide with oxygen and nitrogen atoms in Earth's atmosphere, the result is a dazzling light show.

We can only see the auroras in darkness. Auroras do happen during the day, but it's impossible to see them with the naked eye. People sometimes describe auroras as a spectacular sunset or sunrise. Auroras also look like ribbons of color, fiery glows or shimmering waves of light. They can be red, blue, violet or green, depending on the altitude of the gases. The most intriguing thing about them is that they are always different because the atmosphere is ever-changing.

Auroras happen near the polar regions -- magnetic north and south. The magnetic north and south poles attract the charged particles, which is why auroras happen most frequently in a radius around each pole. Auroras also happen in pairs, meaning if there is an aurora at the North Pole, there is a corresponding one at the South Pole. Aurora borealis are Northern Lights, and aurora australis are Southern Lights. This article focuses on the Northern version.

Where can you get a glimpse of nature's light show?