Browse the article What Time Is It? Time for the World's Most Accurate Clock! 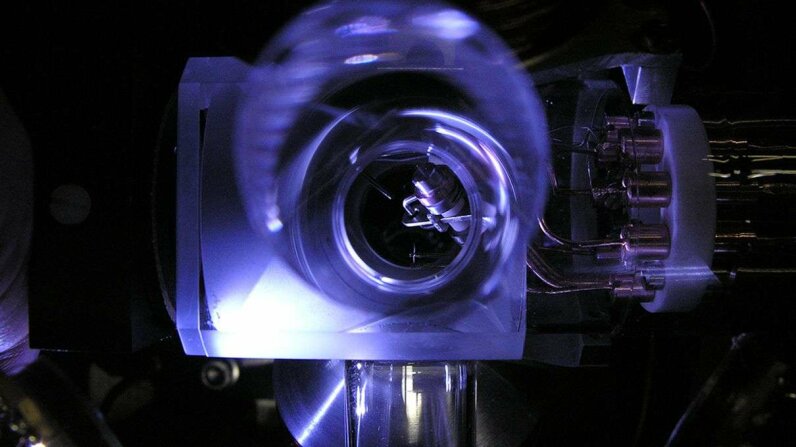 If you think your Apple watch is the coolest thing in timekeeping, think again. Scientists at Germany's Physikalisch-Technische Bundesanstalt (PTB) have just published a paper in the journal Physical Review Letters on the most accurate timekeeping device in history. It beats out the previous champs, atomic clocks, by a large margin. In fact, the new single-ion clock is so accurate that it may force us to redefine what a "second" is.

To understand the single-ion clock, you have to understand its predecessor, the atomic clock. Scientists have spent a lot of time watching atoms. They've figured out that an atom's electrons do a lot of predictable and detectable things when they jump from energy level to energy level in an atom (remember those electron clouds you had to draw in school?). In an atomic clock, atoms are forced to sit relatively still and then blasted with energy from a known frequency (like lasers or microwaves). The electrons move as a result of this energy blast, and the clock counts those movements. The clock knows how much time has passed by combining two known things (the behaviors of the electrons and the properties of the energy blast) to figure out an unknown thing (how much time has passed).

The Germans' single-ion clock kicks the atomic clock's timekeeping butt on that score. Its systematic uncertainty is 3 x 10-18. That's 100 times better than a cesium atomic clock, an accuracy that scientists have been trying to attain since physicist Hans Dehmelt said it was possible back in 1981.

The PTB single-ion clock uses Yb+, an ion of ytterbium, but there are research projects in the U.K. and China on single-ion clocks based around other ions as well, such as Sr+, Ca+ and Al+.

Dr. Christian Tamm, who works with the optical clocks at PTB, told us via email, "Each of these ion systems has particular advantages and disadvantages with respect to accuracy potential and technical complexity."

Tamm adds, "Yb+ seems to have a high accuracy potential challenging Al+, but maybe a clock based on Yb+ is easier to realize and optimize."

This discovery has way bigger implications than just making sure you're on time for your next swim meet. Super accurate timekeeping has a huge impact on GPS and even the Internet. PTB hopes to use its clock in order to test physical theories.

Now That's Cool
Some scientists think that atomic clocks could be used to search for dark matter!