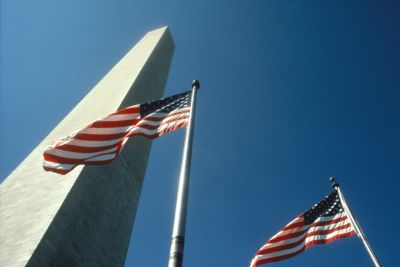 ©2006 Washington, DC, Convention and Tourism Corporation An interior tour of the 555-foot Washington Monument shows you how the striking building was made.

Washington is known worldwide for classic architecture and is home to many of the most important and recognizable landmarks in the United States. George Washington held a design competition, taking special care to select an architect who would design The White House in a style that would counter the grand scale of European palaces.

Although the building has lost and gained additions, was burned by the British and rebuilt, and has had infrastructure updates, James Hoban's elegant Executive Mansion still retains a human scale, compared to many of the enormous homes built by old money and nouveau riche in Potomac, Maryland, Great Falls, Virginia, and further afield in Hollywood. Tourists often depart the White House after a tour, commenting that it is not as large as they imagined it would be.

The neoclassical US Capitol, an enduring symbol of democracy, was inspired by ancient Greek and Roman designs. A new visitors' center has been in the works since 9/11, and while some printed guidebooks state it's due to be completed in 2005, work continues. As the scope expands and the cost keeps escalating by tens of millions, the feeling in Washington about a completion date is, "Your guess is as good as mine."

Washington's landmark monuments are striking and iconic. In daylight or by moonlight, even long-time residents are struck by the simplicity of the Washington Monument, the grace of The Jefferson, and the gravity of the Lincoln Memorial. New monuments are routinely criticized and gradually accepted. At the moment, Washingtonians are not impressed with the National WWII Memorial that faces west toward the Lincoln. The attraction is the stream of elderly veterans who come to reflect on their experiences and remember their comrades. Tourists and residents are compelled to shake hands and express gratitude for the veterans' bravery and service.

The Vietnam Veterans Memorial is another landmark that got no respect at the outset. Designed by Maya Lin, the then-21-year-old Yalie who won a design competition, heard her concept scorned as a scar in the Earth. Now, those walls of names are beloved. Approaching The Wall is extremely moving, as is seeing the many loving tokens left behind.

Insider's Guide: The Best of Architecture & Landmarks in Washington, DC

Insider's Guide: The Best of Architecture & Landmarks in Washington, DC

An often overlooked architectural treasure is the Library of Congress (101 Independence Ave SE). The Italian Renaissance style building is a gem inside and out. The main reading room is a jaw-dropper, with eight enormous columns soaring toward the 160-foot ceiling. The Great Hall also has marble columns, and arches, along with bronze statues, stained glass, murals, and mosaics.

A memorial that was welcomed enthusiastically from its unveiling in 1997 is the Franklin D. Roosevelt Memorial (West Basin Dr). The four granite spaces that represent each of FDR's presidential terms are extremely popular after dark. The lighting is soft and effective, both on bronze statues of men in a breadline, casting shadows on forceful waterfalls. When the cherry blossoms are in bloom it's especially alluring, since it's sited on the Tidal Basin.

The Washington Monument (15th St SW) stands 555 feet tall, in memory to the country's first president, George Washington. An interior tour will not only show you how the building was made, but you'll get a glimpse of 193 memorial stones donated from states and cities since 1848. The stones were a product of each state and show support for Washington's ideals. The stones had been damaged from moisture and vandals over the years, but a three-year restoration project has brought the shine and beauty back to them.

It's also worth taking the elevator, or 898 steps, to the observation room to see the mesmerizing view, but you need to reserve tickets and a time in advance by calling toll-free 800-967-2283. You can obtain free, same-day tickets at the 15th Street kiosk beginning at 8:30 am, but they are distributed on a first-come, first-served basis until all tickets for that day are gone. Get there early (before 8 am) because they often go quickly. One person can receive up to six tickets. Be aware that US Park Police will continue screening visitors before the tours.

The World War II Memorial (17th St) has twin Atlantic and Pacific pavilions divided by an oval-shaped pool, symbolizing a war fought across two oceans. Fifty-six wreath-adorned stone pillars -- each representing a US state or territory -- form semicircles on the memorial's north and south sides. The wide entrance on the memorial's east side features bas-relief sculptures depicting scenes of Americans at war. A nearby reflecting pool cascades over twin waterfalls that bookend with the Freedom Wall, which shines with 4,000 gold stars.

Favorite modern architecture on the list of prominent Washington architects includes Dulles Airport (45020 Aviation Dr, Sterling, VA), which was designed by Eero Saarinen and opened in 1962, and the 12-story 2004 Association of Realtors Building (500 New Jersey Ave NW), which is a few blocks from the U.S. Capitol. This clever sliver of a building is the most environmentally friendly in town, and the only new DC structure given the official stamp of approval as a 'green' building.

Arthur Cotton Moore, the sixth-generation Washingtonian who designed the Washington Harbour Complex (31st & K Sts, NW, at the dead end of Wisconsin Avenue) in Georgetown, rightfully claims that many of us didn't realize we were living on a river until that waterfront complex opened at the base of Georgetown.

The city's most famous urban planning myth is that no building may be taller than the Washington Monument (15th St SW). This myth isn't true. A height restriction was put into place as a reaction to the 14-story Cairo Hotel (1615 Q St NW at 17th St NW), which was built in 1894 and is now a condo building. The first height law was based on the 288-foot height of The Capitol.

Adjustments were made through the years, and current law restricts height as it relates to the surroundings, with exemptions for church spires, engineering structures, and the like. Most parking garages are underground as a result of the height restrictions, and that benefits the skyline. Thomas Jefferson would be pleased. He had hoped Washington would mimic his beloved Paris, with structures "low and convenient, and the streets light and airy."

DC isn't known for its shopping scene, but if you're looking for high style, good deals, and maybe a souvenir or two, you've come to the right place. Go to the next page for our guide to Washington, DC, shopping.