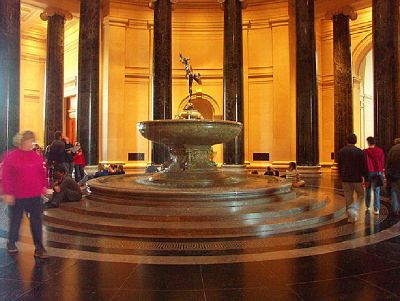 ©2006 see-places.com The National Gallery of Art holds the only Leonardo da Vinci painting on display outside of Europe, as well as many other masterpieces.

Washington is rich in marble shrines to art and culture, from the National Gallery of Art to the Kennedy Center. Museums celebrate fine art and antiques, textiles, American craft and decorative arts, American history, women artists, the postal service, and the American Indian.

Monuments and the Holocaust Museum honor victims and heroes of wars and other international conflicts. DC theater offerings span the full range from experimental drama to corny musicals. Washington also has its own ballet company, and Placido Domingo oversees The Washington Opera.

Insider's Guide: The Best of Arts & Culture in Washington, DC

Insider's Guide: The Best of Arts & Culture in Washington, DC

The National Gallery of Art (600 Constitution Ave) has masterpieces from the 13th century to the present. Highlights include the only Leonardo da Vinci painting on display outside of Europe, and a comprehensive collection of Italian paintings and sculptures.

The biggest splash of all is the re-opening of two Smithsonian museums in the restored Patent Office Building. The Donald W. Reynolds Center for American Art and Portraiture (Eighth and F Sts NW) houses the National Portrait Gallery and the Museum of American Art. The portrait gallery exhibits portraits of people who have made a significant contribution to American history.

Fourteen new exhibits have been added, including prominent American sports figures, composers of the 20th century, and cultural and political figures of the last 60 years. The Museum of American Art showcases the best art and artists of the United States in a collection of 40,000-plus pieces of art.

Many tourists visit Ford's Theatre (511 10th St NW) and the Lincoln Museum within. Without much effort, a visitor also can find a performance to enjoy there most nights of the week between the Shakespeare Theatre, Studio, Arena Stage, Washington Ballet, university programs, church choir performances, and regional theater.

Some cultural activities take advance planning. Smithsonian Resident Associates, with a catalog of hundreds of seminars and lectures, is rooted in Smithsonian collections and mission, also taking advantage of well-known and well-connected Washingtonians willing to share their talents, insights, and contacts.

Some of the most beautiful residences and places of business in town are embassies, and many host events that are open to the public. Visitors who call ahead of time to the embassy they'd like to visit may be able to attend a lecture, film, play, concert -- even the occasional wine and cheese reception -- with a bit of scheduling luck. At the very least, you can take a walking street tour of Washington's Embassy Row from April 1 to Oct. 31. Meet the tour guides 10 am daily during those months at the DuPont Circle Station (DuPont South exit near the pay phones).

Washington, DC, holds countelss architectural landmarks, from historical monuments to stately government buildings and the White House. Keep reading to learn more about the architecture and landmarks in Washington, DC.