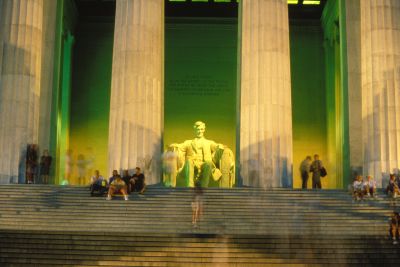 ©2006 Washington, DC, Convention and Tourism Corporation The Lincoln Memorial overlooks a reflecting pool and is especially impressive at night.

When you visit, you'll find quite a few attractions that will keep you busy and interested, whether you're young or young-at-heart. You'll find world renowned museums, captivating monuments and memorials, and parks filled with considerable natural beauty. That's only the beginning.

It's almost impossible to plan a trip to DC around the bloom of the delicate cherry blossoms that only last two weeks in late March or April, but the National Cherry Blossom Festival is on the calendar and every year, about one million visitors come to Washington hoping the festivities and their visit will coincide with the pink phenomenon around the Tidal Basin.

Although the next event isn't until January, 2009, every four years in January, a U.S. president is inaugurated and Washington turns festive at one of the coldest times of the year. Most Washingtonians don't go down to the Capitol or to the balls, but the city atmosphere is electric. In this most political of cities, Inauguration Day is the Super Bowl on an Olympics schedule. Many residents bundle up and view the parade down Pennsylvania Avenue.

The Lincoln Memorial (23rd St NW) looks across a reflecting pool to the Washington Monument and the Capitol. Lincoln's Gettysburg Address and Second Inaugural Address are inscribed on the walls of this temple-like structure, which is particularly impressive at night, thanks to dramatic lighting. Its 36 columns represent the 36 states in the Union at the time of Lincoln's death.

The National Air and Space Museum (600 Independence Ave SW) is a thrilling experience for those who have lived through the age of space exploration or earlier. The exhibits chronicle the beginning of the Wright Brothers at Kitty Hawk, Charles Lindbergh's Spirit of St. Louis, and through the command module Columbia, which carried the first man on the moon. World War II buffs will see American fighter planes, British submarines, and Japanese planes. An Apollo to the Moon exhibit includes moon rocks, astronaut spacesuits, and other artifacts. If you go to the museum's IMAX Theater, you'll watch a five-story-high screen of Earth as seen from the space shuttle.

The Vietnam Veterans Memorial (900 Ohio Dr SW) has polished black walls featuring the names of 58,175 servicemen who died in or remain missing from the Vietnam War. Also onsite are the Three Servicemen Statue and Flagpole and the Vietnam Women's Memorial.

The US Holocaust Memorial Museum (100 Raoul Wallenberg Plaza SW) presents information, images, and artifacts in an architectural setting that enhances visitors' understanding of the Holocaust. A self-guided Permanent Exhibition includes powerful photos, film, eyewitness testimonies, victims' belongings, and reconstructions of concentration camp buildings. One stirring aspect is the Hall of Faces, a narrow three-story space filled with more than 3,000 photos of Jews from one Lithuanian town who were murdered in September 1941. Visitors can light memorial candles in the niches of the walls in the sky-lighted Hall of Remembrance.

The International Spy Museum (800 F St NW) sheds light on the world of international espionage with artifacts that explain how the work is done -- from invisible ink to through-the-wall cameras. The museum uses historic photos, state-of-the-art audiovisual programs, and interactive computer displays to explain how spies operated and helped change history. An exhibit also explains how codes were made and broken throughout history.

The Supreme Court of the United States (1st St NE and Maryland Ave) allows court session to be open to the public 10 am and 1 pm on a first-come, first-served basis. Twenty-minute lectures are offered in the courtroom Monday through Friday, with the exception of when the court is in session.

The National Aquarium (14th St and Constitution Ave NW) is the place to see more than 1,700 specimens of freshwater and saltwater animals, and watch trained professionals feed the sharks, piranhas, and alligators on alternating days of the week. Animal keepers give talks about the animals daily at 2 pm.

Step back in time to the farm days of the mid-1800s with a visit to the National Colonial Farm (3400 Bryan Point Rd). This farm is a living history featuring an herb garden, livestock, and replicated buildings from that era. It's located on 150 acres in Piscataway National Park.

Washington, DC, is brimming with national museums and galleries, performing arts groups, and monuments to the arts. Learn more about exploring arts and culture in Washington, DC, on the next page.