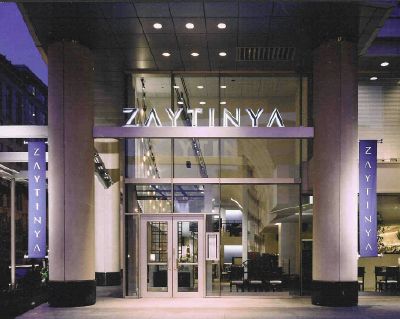 ©2006 Maxwell Mackenzie Zaytinya is known for its Greek, Turkish, and Lebanese menu items.

In the past decade, Washington dining has gone from pedestrian to exciting. Celebrity chefs have raised the city's profile. DC is now a destination -- and metropolitan area -- where menu items are healthful, fresh, regional, and imaginative, and organic food is gaining in popularity.

Appropriate to a city full of embassies and World Bank/IMF staff, the number and breadth of ethnic eateries has exploded. Hotel dining has become more adventurous and sophisticated. On weekends, reservations are a must.

If a restaurant is trendy, popular, or expensive, expect to need to call ahead to reserve a table. For large parties, normally six or more, a gratuity of 15 to 18 percent might be included. Tips in Washington average around 18 percent. For ordinary service, 15 percent is acceptable, but it's 20 percent for good service.

The Mobil Four-Star Mandarin Oriental Washington DC (1330 Maryland Ave), on the waterfront across from the Jefferson Memorial, set the bar high for hotel dining experiences with its Mobil Four-Star CityZen Restaurant. The room impresses with its stone pillars, brown leather banquettes, and glowing orange-red lighting. Chef Eric Ziebold was a catch, coming directly to DC from Napa's famous Mobil Five-Star French Laundry. He is so creative and motivated to impress that the menu changes monthly or more, so there's no use getting one's heart set on a certain specialty of the house. One thing that seems certain is Ziebold's delightful mini-Parker House rolls.

DC pizza has gotten national notice, thanks to Two Amys (3715 Macomb St NW) and Mobil One-Star Pizzeria Paradiso (2029 P St, NW and 3282 M St, NW). Both their menus are mainly pizza, both make pies in a wood oven; order the toppings you like best and dig in.

The empire of Spain's Jose Andres keeps expanding. Mobil Two-Star Jaleo (4807th St), Mobil Three-Star Cafe Atlantico (405 8th St), and Zaytinya (701 9th St NW) are all popular and award winning standouts. Zaytinya, for one, is known for its modern and airy, white and wood, two-story setting as well as its Greek, Turkish, and Lebanese menu items such as lamb meatballs with dried fruit and cinnamon. Jaleo is a treat with its murals of flamenco dancers and Spanish menu. Cafe Atlantico serves a fine Latin American menu.

At Equinox, Todd Gray (818 Connecticut Ave NW) is known for his lump crab cakes, barbequed salmon, and Amish chicken. The restaurant is pleasant and comfortable but nondescript.

Frank Morales reigns at Zola (800 F St NW), where the rich red decor is a nod to the Spy Museum next door. Doors leading to the bathrooms are mirrored; there are a few discreet peepholes in the wall. Its chic bar has huge windows overlooking a busy, trendy downtown corner. Try the duck with peppery marmalade, jumbo prawns with green pea sticky rice, or caramelized Meyer lemons.

At Mobil Four-Star Michel Richard Citronelle (3000 M St NW), make sure you don't skip dessert. This celebrated chef pulled himself out of poverty and neglect by becoming a pastry apprentice in France when he was a young teen. At Citronelle, there's whimsy added to every apple and square of chocolate. His entrees are considered works of art as well, and the menu descriptions are written with humor: caviar penguins, and scallops in a giant tomato symphony.

Mobil One-Star Nathan's (3150 M St) is a classic at the crossroads of Wisconsin and M Streets in Georgetown. The restaurant has great American food and interesting luncheon series featuring well-known newsmakers who live in or pass through DC. The main dining room is decorated with huge photo portraits of DC political icons by David Hume Kennerly, White House photographer under Gerald Ford.

A more formal Georgetown tradition is dining at Mobil Three-Star 1789 Restaurant (1226 36th St NW) within the campus of Georgetown University. Diners rave about the rack of American lamb with creamy feta potatoes and garlic spinach.

The young and stylish as well as rich and famous prefer Mobil Two-Star Cafe Milano (3251 Prospect St NW), known for its elegance and sophisticated Northern Italian cuisine. The crisply fried zucchini blossoms and all the various risottos are irresistible.

For Italian, the light and modern Primi Piatti (2013 I St NW) is a popular choice for monkfish that's pan roasted and flavored with lemon juice, pinot grigio-preserved lemon, and caper berries.

Another spot for Italian is Finemondo (1319 F St NW), where favorites include the agnolotti, a pillow-shaped pasta stuffed with ricotta cheese and spinach in a cream sauce, and the veal chops. Finemondo is billed as Italian country kitchen dining, comes close with dark wood, ceramic tiles and pottery throughout the dining room and bar.

With so much to see in Washington, DC, you'll need a plan to make sure you don't miss anything. Go to the next page to read our suggested itineraries for visiting Washington, DC.