Getting In, Getting Around Washington, DC 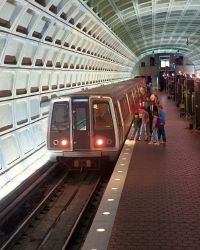 ©2006 Washington, DC, Convention and Tourism Corporation The "Metro," or Metrorail, is safe, clean, and efficient.

Washington, DC, is not an easy city to drive in, due to heavy traffic and some confusing street layouts. If you'd rather avoid the headache of driving, consider taking advantage of the city's public transportation system during your visit. Here's primer on Washington, DC, transportation:

Rental car: Rental car counters are located on the first floor in the Ronald Reagan National Airport's Parking Garage A. You can board the "Parking / Rental Car" shuttle, which stops at each terminal outside baggage claim, or take a ten-minute walk. Signs and staff are available to guide you.

The rental car facility at Dulles Airport is located at the intersection of Autopilot Drive and Rudder Road. A free shuttle is available to take you there.

The car rental facility is ten minutes away from the BWI airport, at Stoney Run Road and New Ridge Road, and there's a free shuttle service to and from the airport.

Taxi: Taxicab stands are located near the baggage claim (Arrivals) exits of each terminal at Ronald Reagan National Airport. Dispatchers help you select a taxi based on your destination. If you need to get to downtown DC, it'll be a 15-minute ride that will cost you about $20.

Taxis line up on Dulles' Ground Transportation Level, where a dispatcher is on duty 24 hours a day. If you want to get to downtown DC, the 40-minute ride will cost you between $50 and $60.

Taxis are the best way to get from BWI to downtown DC, but it will be expensive. The taxi stand is located just outside of the baggage claim area of the Lower Level. A one-way fare to DC will cost about $65.

Public transportation: It's the easiest way to get downtown from Ronald Reagan National, or "National" as Washingtonians still call it. The elevated Metrorail station is connected by pedestrian walkways to the concourse level of Terminals B and C, and is accessible by elevators. The fare cost is $1.35.

SuperShuttle stops are on the ground level outside each terminal at Ronald Reagan National. With reasonable taxi fares and easy Metrorail options, shuttles aren't a common choice to get downtown. They are used mostly to reach residences and businesses in the suburbs. Call (202-296-6662 or 1-800 258-3826) to make arrangements and reservations.

Look for signs in the BWI airport directing you to the bus platform on the Lower Level. After you exit the airport to the bus platform, look for signs directing you to the MARC Train. Take it to the MARC/Amtrak station. Buy a ticket for the MARC train to Union Station in DC. You'll arrive in 40 minutes once you are on the train, and the fare is $6.

You'll find the BWI Express/B30 on the lower level of the airport's International Pier and lower level of Concourse A/B. Take the B30 bus to the Greenbelt Metro Station. Purchase a fare card and board the Green Line train toward Branch Avenue. Exit the train at Fort Totten and transfer to the Red Line toward Shady Grove. Get off at Union Station in DC. The 80-minute ride will cost $5.35.

Rush hour: DC traffic is third only to Los Angeles and San Francisco/Oakland in congestion and delays, according to the Texas Transportation Institute, which publishes traffic statistics every other year.

DC is a difficult city to navigate, with abundant circles and squares, one-way and security-blocked streets. The main arteries such as the Beltway (Route 495) are jammed for all of rush hour, sometimes both ways.

Morning rush hour starts before 7 am and traffic volume is still strong at 9:30 am. Afternoon-into-evening rush hour is drawn out, too. Canal Road, which leads from the Georgetown end of DC and runs parallel to the Potomac into the Maryland suburbs, becomes one-way restricted at 2:45 pm. Rush hour ends between 7 and 7:30 pm.

There are only a few bridges into the city from Arlington and Alexandria, and traffic problems are always highlighted on morning traffic reports. Even before housing prices boomed, much of the area population has commuted from long distances.

Rules of the road: With many circles, one-way streets, and security-blocked streets, caution is the primary rule of the road in Washington. When it comes to round-abouts or street circles, vehicles in the circle have the right of way.

Public transportation: The Washington Metropolitan Area Transit Authority provides buses, metrorail, and subway service. When Washingtonians say "Metro," they mean the subway, a.k.a. Metrorail. The bus system is called Metrobus, and is usually simply referred to as the bus. Metro -- bus and rail -- is widely considered safe, clean, and efficient. Metro rail cars have carpeting and decent seating, and are fully air-conditioned. Five rail lines (Red, Yellow, Blue, Green, and Orange) and an extensive bus system (more than 15,000 stops on 400 routes) connect DC to Maryland and Virginia.

Rail station entrances are marked with rectangular towers topped with the letter "M." Stripes of color indicate the lines traveling down below. Easy-to-read route maps are displayed at each station and inside each rail car. Each train displays the name of its farthest destination. Fare cards can be purchased at machines located inside the stations.

DC's subway is limited and doesn't serve all parts of the city yet. Georgetown and Adams Morgan are two neighborhoods that were left off the map.

Metro service begins at 5 am weekdays and 7 am weekends. It ends at midnight Sunday through Thursday, 3 am Friday and Saturday nights. Metro bus schedules vary by route. Free transfers to use within two hours are available, and they are accepted on most local buses in addition to Metrobuses. Look for transfer dispenser machines as you enter the station, or ask the booth attendant for help.

Bus fares are $1.25, and 60 cents for seniors and people with disabilities, and $3 for express buses. Metrorail fares run $1.35 to $3.90 based on distance traveled. A $6.50 One Day Pass is valid for unlimited Metrorail travel on weekdays after 9:30 am or all day Saturdays, Sundays, or federal holidays. Passes expire at midnight on weeknights or 3 am Friday and Saturday nights.

The DC Circulator debuted in July 2005 to primarily serve visitors. This bus service connects major tourist attractions and parts of town without good Metrorail connections. Operating daily from 8 am to 9 pm, the red, white, black, and yellow buses have routes painted on the side. Each ride is $1.

Taxis: Taxis are plentiful in Washington and fares aren't expensive, but charges are based on a mysterious zone system. There are 8 zones and 23 subzones. Hardly anyone understands it, but zone maps are posted in each vehicle, and a handy Web site calculates point-to-point. If you're concerned about being cheated and have no time to calculate, use the strategy of asking for a receipt before starting the ride. This puts the driver on notice.

Since it isn't normally practical to calculate fares in advance, you can also ask the driver for an estimate. Remember that DC has four quadrants -- Northwest, Northeast, Southwest, and Southeast. Since many streets run through more than one quadrant, that designation can make a huge difference. The quadrant will usually be "NW" for visitors; include it in the address.

Many drivers fuss over payment with large bills, so don't use money larger than a $20. It's rare for a ride to cost more than $12 -- that would be a trip through eight zones. A long ride, from the National Cathedral in upper Northwest to the U.S. Capitol, runs $11. Tipping 15 percent is the norm.

On foot: Washington is an easy walking city, with wide, plentiful sidewalks and lots of concentrated sights. Three ideal areas for walking are the National Mall, Georgetown, and Capitol Hill. Among them, the Mall has the largest cluster of monuments and museums. Georgetown's residential architecture includes some of the most beautiful, and expensive, in the city. Georgian mansions and Federal and Classic Revival homes are best seen up close, in between strolling the shops of Wisconsin and M Streets.

Biking: Metro has a Bike-on-Bus program and there's no additional charge. All buses have racks that can hold up to two bikes per bus. With the same accommodation on Montgomery County's Ride On buses, DC is a leader in bike transportation.

Bike the Sites (202-842-BIKE or 866-736-8224) rents bikes, mobility scooters, and wheelchairs, with pick up half a block from the National Mall. They also offer tours on bicycle; one is of the monuments at night. Better Bikes also has an excellent reputation for rentals, but does not offer tours. The Washington Area Bicyclist Association Web site is a good resource for information and recommended bike rides and routes.