The History of Voyageurs National Park 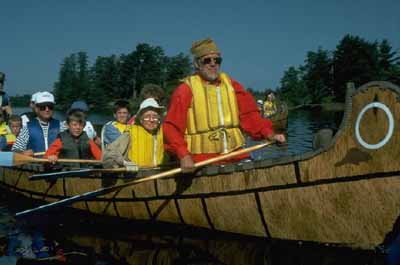 ©2006 National Park Services Dressed in the style of a typical voyageur, a historical interpreter paddles his birchbark canoe along one of the park's waterways.

Except for a brief gold rush in the area of Rainy Lake at the end of the 19th century, which left behind a mine shaft and tailings on Bushyhead Island, the region that makes up Voyageurs National Park has always been wilderness.

First the Cree, Monsoni, Assiniboin, and then the Ojibwe paddled their canoes through the wetlands to fish, hunt, gather cranberries, and harvest wild rice. Later, during the 18th and 19th centuries, French-Canadian voyageurs, or coureur-du-bois (runners of the woods), traveled through the region in large canoes piled high with furs and trade goods. The voyageurs followed a route between northwest Canada and Montreal, often paddling their birch-bark canoes 16 or more hours a day.

Portaging, the carrying of canoes and gear to get around water that was not navigable, was the most difficult part of their lives. The annual trading route of the voyageurs included 120 separate portages. The most arduous, appropriately called Grand Portage, was a nine-mile haul over hills and through swamps.

The route of the voyageurs, celebrated by the park's miles of waterways and portages, became so important that it was used to define the border between the United States and British-held territories in the treaty that put an end to the American Revolutionary War.

Land-dwellers, beware! Voyageurs National Park can't be explored properly without getting wet. But that only adds to the adventure of a trip to this scenic wilderness in northern Minnesota.