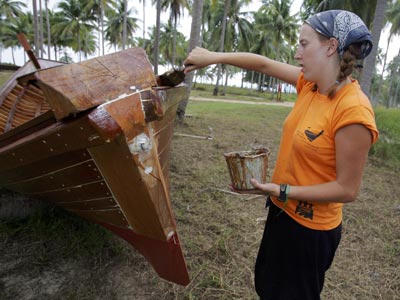 A Canadian volunteer varnishes a long tail boat at the Cape Pakarang Boatyard in Thailand. After the tsunami, many traditional fishermen lost their boats.
Getty Images

Voluntourists like to believe they're making a positive difference with the work they do on vacation. But not everyone agrees with that sentiment. Critics have their doubts about the value of voluntourism.

Proponents point out that voluntourism not only funnels dollars into a local economy, but also assists in positive community development. This may be true, but critics feel that voluntourism may do more harm than good. They claim that short-term voluntourists often arrive unskilled and untrained, and as a result, don't have enough time to make an effective contribution. Another concern is that some work projects actually displace local workers, not to mention the insinuation that locals aren't good enough to do the work themselves.

In addition, critics believe that voluntourism doesn't contribute enough money to the local economy. If volunteers are busy working all the time, they're not out spending their money on tourist-related activities, which isn't good if the particular village or country depends on tourism dollars to keep its economy strong. As a result, some organizations are now trying to incorporate more touristy activities into volunteer work projects [source: Kuo, Fowler].

Because voluntourism is a relatively new business niche, the voluntourism market is largely unregulated. Some organizations do take advantage of this, operating tours that are profit-driven more than community-driven. After paying a lot of money, voluntourists have reported arriving on site to find that another group had already completed the projects they were to do. Some were even asked to perform work that was clearly at odds with the community's desires [source: Fitzpatrick].