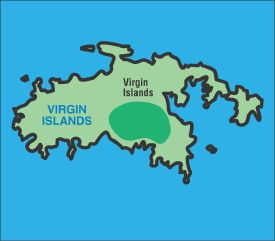 Famous for its natural beauty, Virgin Islands National Park covers about three-quarters of St. John and nearly all of Hassel Island on St. Thomas. To get there, visitors can take a 20-minute ferry ride from Red Hook, St. Thomas (the ferry runs every hour). Within the park's borders lie white sandy beaches, crystal blue-green waters teeming with sea life, and tropical forests that grow more than 800 species of plants. Visitors can also explore relics from the Pre-Colombian Amerindian civilization.

Other services: One campground

Virgin Islands National Park, a unique national treasure in a beautiful setting, is one of just two national parks that do not lie within the 50 United States. (The other is located in American Samoa.)

Within the park's borders are some 9,000 acres of spectacular Caribbean beaches, forests, and mountains, as well as approximately 5,650 undersea acres and several stunning underwater nature trails. The park encompasses approximately three-quarters of St. John, the third largest of the U.S. Virgin Islands. Visitors will find an incredible diversity of plant life, owing to a huge amount of annual rainfall, as well as the island's exposure to spore-bearing winds.

Take a look at the next section to gather tips for how to enjoy the crystal-clear waters and the tropical forests of Virgin Islands National Park. 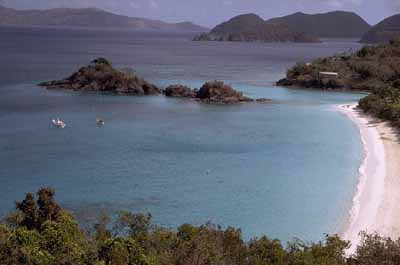 ©2006 National Park Services Trunk Bay is one of the most beautiful beaches in the Caribbean.

Whether you want to explore life in the Caribbean waters or stay dry on land in the tropical forests, the recreational activities at Virgin Islands National Park are limitless.

Trunk Bay, on the northern side of St. John, offers one of the loveliest vistas in the entire Caribbean, a tropical region known for its exceptionally lovely views of lush isles, white beaches, towering mountains, and old pirate strongholds. The view from the bay is a series of beautiful, palm-ringed beaches glistening in the sun.

Sailboats dance in the sparkling blue water, and off in the distance, Whistling Cay, a small speck of land floating in an azure sea, seems to change color on the whim of the sky. During the 19th century, customs officers used the tiny island as a lookout for smugglers sailing between St. John and the nearby British Virgin Islands.

As you wander through high-elevation subtropical forests in the park's interior, you can see 740 plant species. At lower elevations, you'll discover dry, desertlike areas, as well as mangrove swamps that are rich with mangoes, palms, soursops, turpentine trees, and century plants.

This unique national park is loaded with incredible sights to view through the lens of a camera. Here are just a few of the highlights:

Go to the next page to find out more about the history behind Virgin Islands National Park, including information on the islands' settlers.

The History of the Virgin Islands 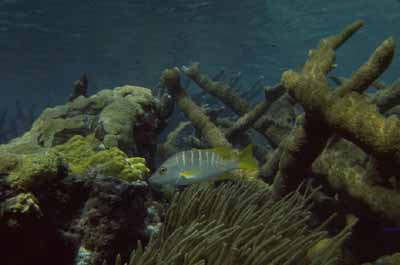 The Virgin Islands have an amazing history. St. John is one of about 100 jewellike islands that dot the blue waters of the northern Caribbean. The islands were visited by Columbus in 1493. Imagining the array of islands to be more extensive than it is, he named them for the 11,000 virgins who accompanied St. Ursula on her ill-fated pilgrimage to Rome.

For the next two centuries, the only Europeans to come to the islands were pirates, but in the 17th century, Danish settlers built vast sugar plantations using slave laborers imported from Africa. The Old World architecture of its towns and villages, coupled with its tropical climate and cooling trade winds, make the islands an ideal vacation spot.

The Virgin Islands owe their natural beauty to the fire of volcanoes. Geologists believe eruptions first occurred some 100 million years ago on the floor of the ocean. Over many eons, molten rock flowed from volcanic vents, forming the foundation of the island that we now know as St. John. Some time after the island building began, the sea floor itself began to rise, lifted up by cataclysmic geologic forces.

The final phase in the construction of St. John was a series of violent eruptions above the sea that created a large island of solidified lava covered by sedimentary rocks, primarily limestone formed from the remains and secretions of marine plants and animals.

It was not long until seeds of plants borne aloft by the trade winds began the spectacular greening of St. John, preparing the island as a welcoming habitat for animals arriving from the mainland. The island's scores of bird species flew in of their own accord, but lizards and other reptiles no doubt floated ashore by accident.

One of the most intriguing aspects of Virgin Islands National Park is its spectacular underwater realm. It's an important part of the history of these islands. The park contains a stunning marine preserve where visitors can explore the complexity of life beneath the sea. Here are coral reefs, broad expanses of underwater grassland, and white sands moving slowly in the water. This lovely, complex, and extremely fragile community of plants and animals forms an exquisite and dynamic underwater reef ecosystem.

One of the park's nature trails lies beneath the sea in lovely Trunk Bay. Special underwater plaques guide snorkelers through the intricacies of the coral reefs. As you swim along the up-to-30-foot-deep, 225-yard-long trail, signs explain how the reef was formed and indicate the kinds of underwater life you are likely to see. In addition to coral, you can observe brilliantly colored conchs, black sea urchins, brittle starfish, and other fascinating creatures.

Virgin Islands National Park is a unique part of the U.S. parks system. With its setting in the Caribbean, this national park seems more like paradise.