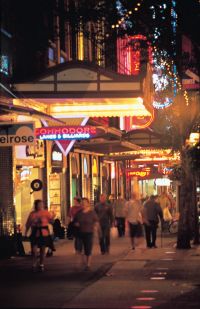 ©2006 John Sinal When the sun goes down in Vancouver, the streets come to life.

Vancouver has been ratcheting up the night scene, and extending the hours. Today you can drink until 4 am at selected clubs and bars in the downtown entertainment district, though the city generally mellows after midnight.

Venues that rock include the Caprice and Roxy nightclubs and the Commodore Ballroom (raunchier than it sounds), all on Granville Street. Chic bars and lounges draw nocturnal sophisticates to Yaletown, including the George (Ultra) Lounge and the Elixir in the Mobil Two-Star Opus Hotel.

While downtown is epicenter, the nightlife seeps into Gastown and over to Davie Street (the gay scene). Commercial Drive, with its political and Latin cultures, is hot into the early hours. A youngish, fashionable crowd hangs out well into the morning on Yew Street in Kitsilano. Main Street has a number of small, funky music venues.

Insider's Guide: The Best of Nightlife & Entertainment in Vancouver

Downtown's Granville has been leveraging in the trendy bars, clubs, and late-night restaurants -- the scene is happening. Yet the longtime Roxy (925 Granville St) remains a favorite club. Similarly, the Shark Club sports bar (180 West Georgia St) packs 'em in.

What's new are the ultra-hip lounges, sometimes in restaurants where you can eat up at the bar. They include the Century Restaurant & Bar (432 Richards St) and Elixir at the super-chic and Mobil Two-Star Opus Hotel (380 Davie St). Also the George Lounge in Yaletown (1137 Hamilton St).

A great place for a microbrew or two is the Yaletown Brewing Company (1111 Mainland St). A lush, laid-back watering hole for Beautiful People is the Bacchus at the Mobil Three-Star Wedgewood Hotel (845 Hornby St).

Big stage shows of every type are held at the Queen Elizabeth Theatre and the Vancouver Centre for the Performing Arts.

If you'd rather relax and unwind than party all night, Vancouver is an ideal destination. With so much natural beauty, it's hard not to relax in Vancouver. On the following page, we'll provide details on some great retreats.