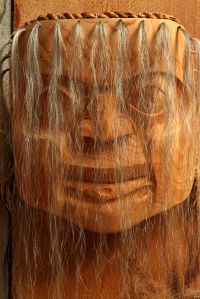 ©2006 A. Rios This totem pole is just one example of the artifacts you'll find from native villages at Vancouver's Museum of Anthropology.

Vancouver has a thriving arts and culture scene. The Vancouver Art Gallery, in a former courthouse, is a downtown centerpiece. Its permanent collection includes many works of British Columbia's best-known artist, Emily Carr (1871-1945). Carr's paintings, along with those of the still living "national treasure" E.J. Hughes, best express the coastal wilderness.

Smaller public and private galleries dot the downtown and South Granville districts. Stores selling quality native Indian and Inuit art are concentrated in Gastown and, to a lesser extent, Yaletown, and the downtown business district.

Major downtown theaters include the Orpheum and the Queen Elizabeth Theatre and Playhouse. For popular theater fare, there's the Granville Island's Granville Island Stage and Revue Theatre (adjoining) and the Stanley Theatre (on Granville Street in the South Granville Rise).

Of course there's a counter-culture culture, too, that's prominent on Commercial Drive, on Main Street, and at major events like the Fringe Festival. Music is everywhere, from the stage of the Orpheum to the pocket parks of Granville Island.

Insider's Guide: The Best of Arts & Culture in Vancouver

It bears repeating, the modernist Museum of Anthropology (6393 Northwest Marine Dr) is a must-see destination. The Great Hall alone, with weather-worn totem poles from native villages along the coast, merits a visit.

Exceptional jewelry in gold and silver, elegant argillite carvings, and superbly woven baskets are also displayed. Most of the work is by regional tribes (or "first nations," as they're called in Canada). But there's also a vast and accessible storage area of world aboriginal art.

While you're on the University of British Columbia's campus, it's a short walk to see the First Nations Longhouse, a unique architectural building where Aboriginal students can study traditions and cultures of their people in the Northwest region.

On the way, visit the tranquil Nitobe Memorial Garden, which is an enclosed and authentic Japanese garden intended as

"a bridge across the Pacific." It's operated by the much larger and quite separate UBC Botanical Garden). This is an exceptional destination if your interest runs to temperate plants -- Asian, alpine, and native to the Pacific Northwest.

A city-owned showpiece is the 1927 Orpheum Theatre (Smith and Granville streets), built for the vaudeville circuit. The building is home to the Vancouver Symphony Orchestra.

For offbeat entertainment, check out the shows at the somewhat lefty Vancouver East Cultural Centre ("the Cultch"), near Commercial Drive (1895 Venables St). While Granville Island hosts the mainstream Granville Island and Revue stages, there are funkier options. Look for the listings at the Waterfront Theatre or Performance Works, at the east end of the island.

If you're dining at the lively Havana Restaurant (1212 Commercial Dr), consider a performance at the 60-seat theater it runs at the back. Another option is the Bard on the Beach Shakespeare Festival in Vanier Park, hosted there from June through September.

City museums with a local flavor include the Vancouver Maritime Museum (1905 Ogden Ave) , where you'll find treasured mementoes of Captain George Vancouver's voyages, including his arrival here in 1792. Children can clamor over the St. Roch, a much-loved wooden Royal Canadian Mountain Police (RCMP) schooner that braved the Northwest Passage more than half a century ago.

For a perfect picture of what middle-class life was like in the West End a century ago, there's the Roedde House Museum (1415 Barclay St).

Culture includes public art, and Vancouver is blessed with hundreds of pieces, from the traditional to the outlandish. Some of the best clusters are on the downtown peninsula -- ideal for an after-dinner stroll. Along the North False Creek seawall, between Davie and Homer streets, you'll see (in the water) what looks like a giant pen dipping into what could be a sea of ink ("Brush with Illumination").

You'll also find some Chinook (an early native language) phrases woven into the seawall railings, such as "Welcome to the Land of Light." What looks like a classical temple sits among the tide-washed rocks ("Marking High Tide and Waiting for Low Tide Pavilions").

Coal Harbour, too, has novel public art blended into gardens, walls, and sidewalk paving stones. A literal standout is "Light Shed," imitating the simple worksheds that stood here a century ago. Poised on log stilts, this aluminum-coated shed is particularly lustrous after dark, when a dim, moving light shines from the interior. The city's Public Art Registry list is available at www.city.vancouver.bc.ca.

Festival Vancouver is a series of August performances at venues that include spectacular Christ Church Cathedral and the UBC First Nations Longhouse. Music runs from classical to jazz to world music.

Go to the next page to learn about the unique landmarks and architecture you'll find in Vancouver.